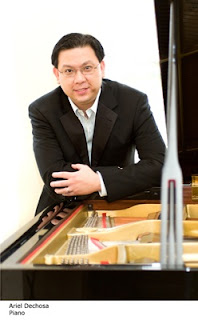 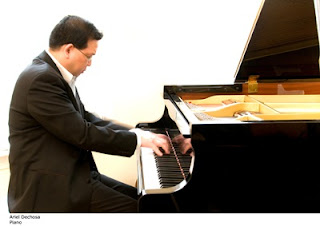 Dechosa won a scholarship to study at the Manhattan School of Music in New York City, where he subsequently earned his Bachelor and Master of Music degrees under the tutelage of Prof. Arkady Aronov. Upon graduation, he was given the prestigious Harold Sauer-Award, the highest prize bestowed to a graduating pianist. He also studied at the Peabody Institute in Baltimore where he earned a Graduate Performing Diploma as a student of Boris Slutsky. He has taken regular master classes with Leon Fleisher, Paul Badura-Skoda, Vladimir Feltsman, and Ruth Laredo.
An active soloist and chamber musician, Dechosa has performed in Weill Recital Hall at Carnegie Hall, Merkin Hall, and Corcoran Gallery of Art, among others. He has played with the Northwest Sinfonietta in Seattle and the Philippine Philharmonic Orchestra performing Beethoven’s “Emperor” Concerto. He has also been invited to perform at music festivals in the La Schola Cantorum Piano Series in Paris, Merano Festival in Italy, and the Lasker Music Festival in North Carolina.
Ariel Dechosa resides in Inwood, West Virginia with his wife Vivian, and teaches at Gilman School in Baltimore, Maryland. He is currently the Music Director of Inter-Atlantic Music Foundation based in the USA and Bulgaria.
Ticket prices: P1000/800/500/P350/200, with discounts available to students, senior citizens and groups. Subscription packages are also available for eight (8) or four (4) shows. For inquiries and subscriptions, please call the CCP Marketing Department (832-1125 loc. 1806), the CCP Box Office (832-3704) or Ticketworld at National Bookstore (891-9999).
by Eccentric Yet Happy