Are you the type of person who always wanted to take some pictures and at the same time want to capture every moment in a video? 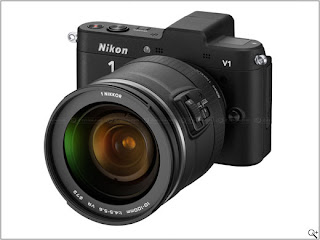 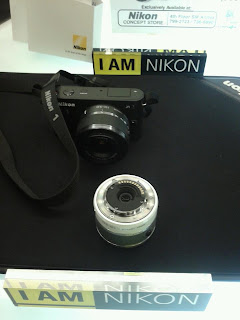 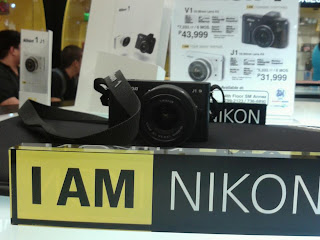 
J1 small sensor mirrorless camera is more compact, less expensive model in the line up and, like the V1, features Hybrid autofocus (combining phase detection and contrast detection AF) that allows the camera to shoot at up to 10 frames-per-second with autofocus. The J1 has only an electronic shutter, limiting sync speed to 1/60th of a second but allowing shutter speeds of up to 1/16000th of a second. It’s built around a 1″ type (13.2mm x 8.8mm) 10MP CMOS sensor, giving a 2.7x crop, which Nikon is calling ‘CX’ format. Like the V1, it can shoot 1080i60 video. The J1 kit with 10-30mm (27-81mm equiv). It’s fastest and easy to use.


One of the feature in J1 that I really like is Motion Snapshot. With Motion Snapshot, there’s a new approach to capturing images that will dramatically alter the way we perceive digital photography. By selecting the Motion Snapshot icon from the Mode Dial at the back of the camera, consumers can capture fleeting moments with staggering depth and emotion like never before. The result unites a frozen still image with a slow-motion movement set to a built-in audio soundtrack to create a portrayal of an occurrence with maximum impact. With Motion Snapshot, users are now able to relive memories in stunning detail, as real movement and depth are included in the image. Motion Snapshot provides a way to once again experience someone’s hair flowing in the breeze or relaxing scenes like waves crashing or rustling leaves that evoke an emotional response.


With its interchangeable lenses that features new technologies aimed at creating better pictures, easier. Nikon’s new Smart Photo Selector feature strives to deliver a perfect image every time. When a “can’t miss” photo opportunity arises, users can switch to the Smart Photo Selector mode which uses the camera’s pre-cache to start shooting and storing images. All of these images are analyzed within the camera, and the best photo is selected based on a number of factors including exposure, focus and advanced facial recognition. While the camera suggests the best image, five frames are recorded, providing the user a choice of their favorite photo. What’s more,  J1 also includes favorite core Nikon technologies, such as Active D-lighting, Auto Scene Selector and Picture Controls.

V1 is enthusiast small sensor mirrorless camera. Built around what the company is calling a ‘CX’ format 10MP CMOS sensors, the cameras is part of the company’s new Nikon 1 line. The V1 is intended as the higher-end model in the lineup and features magnesium alloy construction and a 1.4M dot electronic viewfinder. It also has an accessory port allowing the connection of the SB-N5 mini speedlight or GP-N100 GPS unit. Unlike the J1, it can switch between mechanical and electronic shutter. In common with the J1, in can shoot 1080i60 or 1080p30 video and combines phase detection and contrast detection autofocus, in movie shooting or 10fps continuous bursts. The 1″ type sensor (13.2mm x 8.8mm) gives a 2.7x crop. The V1 kit with 10-30mm (27-81mm equiv.)

What’s make it different from J1? They have the same revolutionary sensor mirroless camera. The new Nikon 1 system is a completely original concept, engineered specifically to strike the ultimate balance of performance, intuitive simplicity and portability to chronicle life like never before. This breakthrough platform lays the foundation for future technologies, and the Nikon 1 system has been created for the consumer who wants to capture, share and connect to life. The fully electronic lens system enables the camera to keep pace with an active lifestyle and delivers amazing images and Full HD 1080p movies to connect with friends and family. Whether it’s a spontaneous outing or a planned trek abroad, the versatility of interchangeable lenses in a convenient form factor will allow a consumer to take the camera with them wherever life leads.

And if you love photography, two-thumbs up with J1 and V1.
by Eccentric Yet Happy