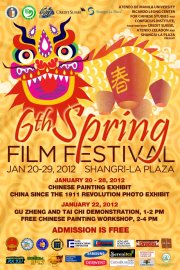 Now on its sixth year, the Ateneo de Manila University Ricardo Leong Center for Chinese Studies and Confucius Institute once again stage the Spring Film Festival.
This year, through the auspices of the Cultural Office of the People’s Republic of China, the festival features six films that cater to different age groups and audiences.  Our leading film, Ocean Heaven, features Jet Li in a family drama.  In the other films, audiences will be treated to a comedy about going home for Chinese New Year, a wedding that sets off the urban/rural debate, an animated film about saving our environment, and the sight of Chow Yun-fat playing the role of Confucius.
Unlike previous years when a minimal admission fee was charged, this year’s festival will be free admission to the public.  Schools are welcome to bring their students for block screenings on a first-come, first-served basis.
Here are the synopses of the featured films:
Ocean Heaven – Ocean Heaven is a family drama which features a father- Sam Wang (played by Jet Li), who is solely taking care of his autistic child- Dafu. Wang finds out that he has liver cancer and has a few days to live. Not only does Wang have to cope with his own suffering and impending death, he also has to deal with the heartache of leaving Dafu with no immediate family. This heartwarming film shows the challenges of being a single parent and how parents, even on their last days, would do anything just to ensure the safety and happiness of their children.
Fans of Jet Li will definitely be surprised to see him in this non-Kungfu movie; this role won him the 2010 Wen Zhang Best Actor Award. The movie was also recognized by the Shanghai Media Awards, CCTV Movie Channel Media Awards 2010 and Golden Goblet Award. In July 2011, Li even named one of his charity projects as Ocean Heaven Project to help children with autism, celebral palsy and other disorders.
Lost on Journey–  A comedy film narrating Li Chenggong’s travel home, as he endures a series of bad luck just to celebrate New Year’s Eve with his family.  Li hops from a plane, to a train, to a bus, and to a boat in the desire to be with his relatives during the most important event of the year. And along the way, he meets a stranger, Niu Geng, who later helps him discover something important about himself and the goodness of other people. This movie is a funny presentation of how a stroke of bad luck brought two different worlds together.
Country Wedding– tells a story of a couple who is about to get married. With their respective families getting so excited, their parents started to meddle with their wedding preparations. The bride’s mother insists on holding the wedding at a ritzy hotel in Beijing Central, the groom’s father, being the director of a cooperative in a rural village, feels indebted to the community, and wants to share the wedding to the whole village. The couple gets caught in between conflicting would-be in-laws. This film is a funny portrayal of the clash of cultures between the city and country side.
Confucius – Confucius, known as the “Great Sage”, lived during the time when China’s dynasties were in chaos and engulfed by corruption and greed. He strongly believed that ethics and education will put all things to order. His wisdom was sought by different dynasty leaders but only to be abandoned after he dutifully served his purpose. The world knows so much of his teachings, but little is known of his hardships. This biographical drama shows the sufferings and pain Confucius endured and the principles he fervently kept that became the foundation of China’s ethics, morality and law. Starring Chow Yun-Fat as Confucius, Nominated for Best Actor at the 30th Hong Kong Film Awards. Other nominations include Best Cinematography, Art Design, Costume Design and Original Song.
Bodyguards and Assassins – In 1905, Hongkong was under the British rule and revolution was on the rise. Sun Yat-Sen was set to land in Hong Kong to meet and to unify faction leaders to finally take down the corrupt and crumbling Qing Dynasty. Because of this, Dowager Cixi wanted Sun Yat-Sen assassinated. For the Chinese people who had been clamoring for freedom, they understood that protecting Sun Yat-Sen would mean keeping China’s liberation hopes alive. Li Yutang, a businessman, gathered a tofu vendor, rickshaw pullers, a beggar and an orphan to serve as bodyguards. These bodyguards displayed their superb fighting skills as they battle it out with the assassins to protect Sun Yat-Sen, whom they haven’t even met. This action-historical movie garnered numerous awards from the 4th Asian Film Awards, 29th Hongkong Film Awards,16th Hongkong Film Critics Society Awards and 47th Golden Horse Awards.
King of Milu Deer– This 3D animation movie, it focuses on environment protection. It is a story of a white deer, Yoyo, who turned into a lady and made friends with Tzan-the prince of Kingdom of Clouds and Dreams. Tzan was ordered by the minister to search the Labyrinth Mountain to hunt for the Milu Deer to use it as a sacrifice to bring rains in the kingdom. But Tzan discovered the beauty of the Labyrinth Mountain and got closer to Yoyo. Together, they fought sea lizard monsters, fire, soldiers, and the evil Minister to save the wildlife and natural resources of the Labyrinth Mountain. This movie became the highest grossing Chinese Animated film of all time and received the Best Animated Film of the 13th Huabiao Awards.