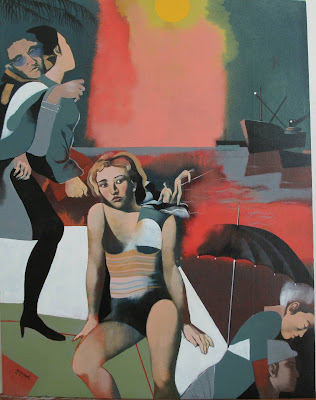 
1) unsmiling faces-derived figurative drama (primarily portraiture, then)
2) replete of appropriations or art-historical quotes
3) suggestive (but only suggestive) of a narrative,
4) quasi-rebellious towards rigid allusions and painting titles’ guidance
5) unpainterly expressionist
6) of an in-a-trance mood as against a happy one, and 7) conscriptive of the painting viewer as peeper. “This erotica should stay around and keep us entranced,” the poet-critic wrote, “being not so much one that tickles the groin as a kind that promotes the understanding that every face, gesture, object, color, and shape is a secret sex object and clandestine true story waiting to be told.” But also debunking a previous simplistic tag on Antonio’s art as “narrative expressionist,” de Veyra wrote: “In Antonio’s case, his blue funkism’s ‘de-expression’, or ‘dis-expression’ and narrative confusion through the mannerisms of narrative imagery and titling, seems to be a produce of a Russian Formalist narrative bent to ‘defamiliarize’ images and shapes towards a higher enigma.


Thus his refusal to ‘express’.”The abovementioned blog started a dialogue between Antonio’s art as wellas intent (of unintent) and de Veyra’s reading, culminating in a late-2011 collection titled “Desire, Ennui, Anxiety”which shall be shown this coming February 6 to 25 at the Yuchengco Museum.


This title for Antonio’s new series does not so much signal a change in his art’s direction as clarify where de Veyra’s reading is right and where it needs to be tweaked. For instance, while de Veyra opts for a Barthesian “variety of narrative possibilities,” Antonio’s pragmatic knowledge of his audience
allows/welcomes two basic approaches to his art.


But, for the other approach, Antonio acknowledges that de Veyra is right about his—Antonio’s—own efforts to frustrate, so to speak, all symbolist and narrative approaches, via experimentations with juxtapositions/ relations and eclectic allusions. These experimentations, appropriations, and art-history quotes result in a dehumanized atmosphere, involving such stuff as machine esthetics and the usual facial expressions of ennui and boredom, all moving towards Antonio’s intended postmodernist multiplicity of meanings. But the final result on each single canvas is an invite to a pseudo-narrative half-aware of this pseudo-ness, welcoming while parodying the various cultural and moral significations possible to professional and popular semiotics.


In this sense, Antonio’s art would be self-described as anxious about the unknown, desirous of knowledge as a matter of course but likewise celebrating the ennui of knowledge’s elusivity, even the charm of that ennui
itself alone. Ennui as both springboard and object of desire, then, visually fulfilled or illustrated on an Antonio-esque drama field.


A final stamp to this anti-narrative effort to “recover the sensation of life”(Victor Shklovsky) is the artist’s devotion to the coloration of Diego Velázquez or Chagall as well as the latent abstract geometrics beneath all
his pseudo-narrative stagings. We would like to invite people or media to witnesses the Marcel Antonio art work this coming February  6 2012  at 6pm for the opening for lunching on cocktail.V.I.S. de Veyra joins Antonio in this exhibit with fourteen new poems printed in the exhibition catalogue.

Published with Blogger-droid v2.0.3
by Eccentric Yet Happy