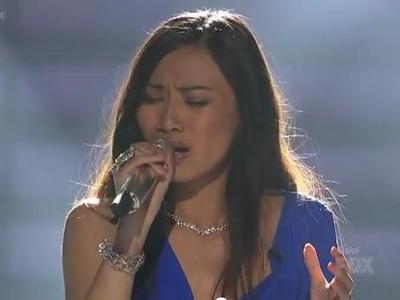 Filipino-Mexican-American contestant Jessica Sanchez stayed on top of a U.S. magazine’s “American Idol” rankings for a second week in a row.

The 16-year-old from San Diego, California is still Entertainment Weekly’s pick to win the 11th season of the popular TV talent search.

This week’s rankings, which were published on the magazine’s website on Wednesday, are based on the contestants’ performances last week.

All three “Idol” judges – Jennifer Lopez, Randy Jackson and Steven Tyler – gave Sanchez a standing ovation last week for her rendition of Whitney Houston’s “I Will Always Love You.”

Tyler even went out on a limb by saying Sanchez “may be the one.”

“How could I not give the top spot to the 16-year-old after a pitch-perfect cover of Whitney Houston’s ‘’I Will Always Love You’?” Entertainment Weekly writer Annie Barrett wrote in this week’s rankings.

“She’s technically amazing. The only thing I question is her emotional believability. She’s a little ‘white swan,’ if you catch my drift. For now, though, she’s the tops,” she said.

Record producer Jimmy Iovine cautioned Sanchez last week not to be overconfident given all the praises she has been receiving.

The magazine said details will be announced on Wednesday night’s show (Thursday morning in Manila).

According to spoilers, “Idol” contestants will sing songs from the year they were born for this week’s show.