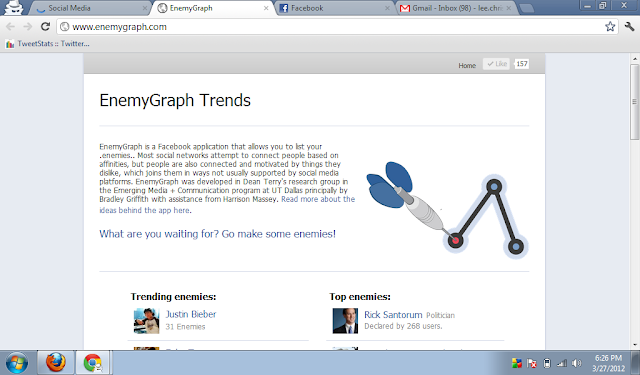 While reading Mashable, I was stumbled upon about this app on Facebook that you can list your “enemies”. EnemyGraph is an application that allows you to list your “enemies”. Any Facebook user of this app can be an enemy. And you can also make any page or group on Facebook an “enemy”. This covers almost everything including people, places and things.
Most social networks attempt to connect people based on affinities: you like a band or film or sports team, I like them, therefore we should be friends. But there are people also connected and motivated by things they dislike. Alliances are created, conversations are generated, friendships are stressed, stretched, and/or enhanced.
EnemyGraph is a critique the social philosophy of Facebook. On it’s developer page, Facebook invites us to “Hack the Graph” – and so we did. We give them a couple of weeks at best before they shut us down for broadening the conversation and for “utilizing community, building conversation, and curating identity” their three elements of social design .EnemyGraph is a kind of social media blasphemy

Because of the fact that you can make pretty much any object, place, or thing that has a Facebook page an “enemy”. In some ways, EnemyGraph is an unfortunate name. So it’s not just a list of people. In fact you can have an entire list with no people on it at all. In a way we are misusing the word “enemy” just as much as Facebook and others have misused “friend”.


I wonder how you would react to this, while using this app.
by Eccentric Yet Happy