They are the nation’s rock royalty. Five will be united as ONE. Be there as they rock your world again. 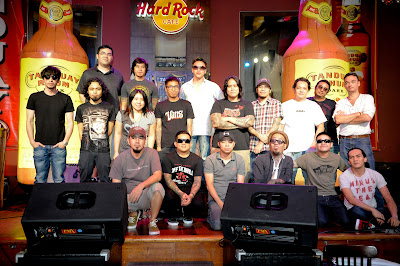 Tanduay Distillers Inc. – with 157 years of making the finest drinks, it is a name to be reckoned with in the liquor industry. And it is also a brand synonymous with great Filipino music. On  March 30, 2012, Tanduay will launch the Tanduay First Five 2012 concert series in Legaspi City – slated once more to become the biggest nationwide tour in the land.

Tanduay’s commitment has always been to providing its fans with a wide array of world-class spirits – from rhum, to wine, to brandy, gin, and vodka. As the tour kicks off in Embarcadero de Legaspi Parking Lot, the biggest concert venue in Legaspi. The brand will also be introducing a new range of high-quality liquor products that will please the taste of the young market. With 148 international awards under its belt, Tanduay’s products have always been marked by excellence and innovation, which makes it distinct from other liquor names.

In 2011, Tanduay launched a smooth, white rhum with the tropical sweetness of coconut and melon, plus the unique kick of cappuccino called Boracay Rhum. The concert goers can try any of the flavors that will suit their mood, whether its straight, on the rocks or mixed.

For this year, a new quality product will be launched from Tanduay. Mardigras, is the first local double-flavored vodka schnapps in the Philippines. From the term Mardigras connotes nothing but fun and festivity. Fun from having double-flavors and low alcohol content which means it’s easy to drink. These new products will be served chilled to the concert goers for them to enjoy Tanduay products and the music they’ve grown to love.

Back in 2006, Tanduay blazed the trail for liquor brands by incorporating Music Marketing into its campaigns. It launched the First Five tour in 2008, and since then, the brand has been successful in securing a wide and loyal market – the music- and fun-loving youth. Tanduay gained cult appeal with young drinkers by being a full-bodied rhum that they can enjoy while listening live to their favorite bands. Today, Tanduay is more than a household name – it is a label for all things worth celebrating, from quiet chill-out nights to huge events like open-field concerts. And the latter is something Tanduay is known for – music fans all over the archipelago are counting on the brand to bring them their favorite acts, all on one stage. They are waiting with baited breath to see whom Tanduay will hail as the “First Five” for this year – the elite few who have attained mythical, rock-legend status.

For 2012, Tanduay has no plans of letting go of that claim. It will continue to be a drink of choice, not just for the youth, but for their icons – The Rock Royalty.

The Kings of Rock Royalty. United for Tanduay Rhum.
This year’s slogan is a blazing follow-up to the success of the past years’ First Five tours. It is a series of concerts that will showcase the best of the best – bands and performers who have made their name not just in the Philippines, but overseas as well. They are the seasoned groups whom emerging talents look up to. They come from different genre kingdoms, but they are united under the flag of Tanduay – the brand that aims to cater to the youth and to uphold the local music scene.

2012’s First Five will star in an ad campaign like no other. Decked out in armor, capes, and weapons, the five groups have been reimagined as the heroes of different kingdoms. The commercial has the feel of a Hollywood warrior film, where the five groups come from different lands. They are brandishing their weapons and waving their swords. They are preparing for the biggest war yet – the battle to save Filipino rock music. And they will do it as one, under the flag of Tanduay.

“From the five kingdoms, they will rise,” the campaign boasts. “The kings of rock royalty will unite for Tanduay Rhum.” We have given them the challenge – to revive our love for genuine Pinoy rock music. They are worthy. They are ready. “Five kings will rule as one! Be there as they rock your world again!” They will prove that they are truly the kings of rock in the country’s biggest nationwide tour.

But a question remains. Who will lead the battle this year?

Our First Five lineup needs no introduction. They have been part of previous First Five tours, and prior to that, they have been touted as the cream of the crop, gaining fans and critical acclaim not just in the land, but abroad. Wolfgang. Kamikazee. Urbandub. Parokya ni Edgar. Rico Blanco. Five musical acts with distinct rock styles, but all equally world-class. They have all made songs which have become anthems of the youth. They are no stranger to playing out to large arena-size crowds, but they remember their roots. They have done national tours and even sold albums in the Southeast Asian region. This year, they will play out their tried-and-true hits for the crowd, and they’ve got some new tracks up their sleeve as well.

The newest member of the Tanduay First Five is Urbandub. The band started in 2000 as a Filipino band of Experimental, Alternative and Indie rock genre. Praised as the “Heroes of Indie Bands”, theirs is the first indie band who released albums nationwide. Originating in Cebu, Philippines, Urbandub is gaining more recognition, capturing attention of fans local and abroad.

Rico Blanco was part of the very first Tanduay First Five Tour back in 2008. A Filipino Rock Icon, a prolific songwriter, producer, performer with a career spanning 16 years. He’s considered as one of the pillars of modern Filipino Rock scene. For 2012, Rico Blanco will be launching a new album and a Major solo concert on top of more endorsements, TV/movie projects and International releases.

Wolfgang. When it comes to playing loud, hard and fast, few bands have been able to match the sheer ferocity and onstage charisma of this band. The band’s sixth studio album “Villains” (released after a 6-year hiatus) was created on the virtual playing field of digital file-exchange across three continents.

Kamikazee, on its 3rd year in the Tanduay First Five Tour will provide the fun and irreverent side of the event being known for its classic pinoy rock. The band mixes their music with comic antics on stage to show the lighter and fun side of rock. The band recently launched its newest album dubbed as “Romantiko” after 3 highly successful albums.

Parokya Ni Edgar will surely bring in the beloved sound that has made them the “Pambansang Banda ng Pilipinas”, as they perform their popular novelty rock hits like “Harana”, “Picha Pie”, “Buloy” and “the Yes Yes Show”. PNE’s achievements have not been only in the sphere of record sales but they’ve won numerous awards from various radio stations and music channels.

The bands claim that to be in Tanduay’s First Five is a distinction of the highest honor; to be named as the country’s “Rock Royalty” is a privilege that will cement their role as the music industry’s movers and shakers. Only a well-loved and distinguished brand such as Tanduay has the power to bestow these labels. The tour is set to hit 30 cities this year, and the turnout is expected to exceed last year’s, by the thousands.

The tour is set to break records in size and scope. Be there as we unveil the Rock Royalty and create music history. Join the war to uphold Pinoy Music. Raise your glass of Tanduay to the true Kings of Rock!

SPECIAL THANKS TO:
WTNS Productions