Superstar DJ David Guetta to release “NOTHING BUT THE BEAT 2.0” with six extra tracks 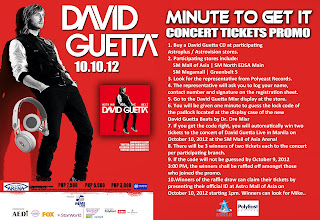 Nothing But The Beat’ has sold nearly three million albums worldwide to date and an astonishing 15 million singles. In the Philippines, ‘NBTB 2.0′ features four of the original album’s futuristic electronic tracks (‘Sunshine’, ‘Lunar’, ‘Toy Story’ and ‘The Alphabeat’), plus two new underground dance floor cuts.

NBTB 2.0 also features 3 of the album’s original futuristic, underground electronic tracks made for the clubs and dance music enthusiasts plus brand-new track “What The F***” which is sure to delight even the most hardcore clubber’s palate and “Metropolis” which Guetta produced with Nicky Romero and was the first release through his recently launched dance label Jack Back Records.

In time for Guetta’s upcoming concert on October 10 at SM Arena presented by Music Management International (MMI), PolyEast Records and Astroplus/Astrovision is giving you a chance to win tickets to see David Guetta live in concert!

With countless global hits and awards under his belt and has defined the sound of chart music over the last three years, David Guetta has become the gold standard in fusing dance and eloctro-pop music. As Nothing But the Beat 2.0will continue to contain worldwide hits ‘Titanium’, ‘Turn Me On’ with Nicki Minaj and ‘I Can Only Imagine’ with Chris Brown and Lil Wayne—buy your copies of NBTB new version at your favourite records outlets.

Nothing But The Beat 2.0 track listing:

2. Turn Me On Feat. Nicki Minaj

4. Without You Feat. Usher

5. I Can Only Imagine Feat. Chris Brown & Lil Wayne

10. Where Them Girls At Feat. Nicki Minaj& Flo Rida

18. Every Chance We Get We Run Feat. Tegan& Sara