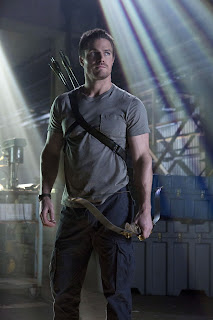 Jack TV gives rise to a new breed of hero as it presents its newest show to date, “Arrow.” Aired every Sunday at 8PM, Arrow is inspired by the DC comic book character Green Arrow, it tells a story of a modern-day hero who fights not with superpowers but with his own lethal set of skills.

After five years of being presumed dead, billionaire playboy Oliver Queen (Stephen Amell) is discovered on a remote island in the Pacific. When he comes home to Starling City, his devoted mother Moira (Susanna Thompson), and much-beloved sister Thea (Willa Holland) welcome him home, but the two can sense Oliver’s not the same man he used to be.

Oliver’s unimaginable ordeals on the island have done something irreversible to him, he has forged himself into a weapon – for reasons he intends to keep from everyone. While Oliver tries to hide the truth about the man he has become, he struggles to reconnect to those closest to him, especially with his former girlfriend, Laurel Lance (Kate Cassidy). As Oliver swears to protect the innocent and uphold justice in Starling City, he realizes that he is treading down a very dangerous path. To protect his new identity, Oliver has decided to live double lives. By day, Oliver plays his former self– a wealthy, carefree and careless philanderer – and by night, a vigilante known as Arrow who is on a mission to right the wrongs of his family, fight the ills of society, and restore Starling City to its former glory.

Watch as this action-packed drama series reveals Starling City’s secrets and intrigues as the story is told from three perspectives: the Queen family, Oliver’s harrowing ordeal on the island and the Arrow’s adventures in Starling City.