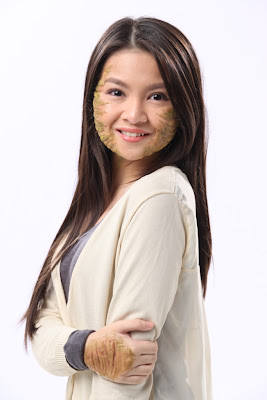 GMA Network is known for its top rating and high quality Telefantasya series such as Mulawin, Encantadia, Alice Bungisngis and My Daddy Dearest that surely enchanted and charmed the hearts of viewers of all ages and at the same time made them laugh, cry and fall in love. This coming November, GMA presents PAROA, ANG KUWENTO NI MARIPOSA, another Telefantasya that will not only tackle love but also family values and relationships. Paroa, Ang Kuwento Ni Mariposa will replace Moon Embracing The Sun beginning November 5 before 24 Oras.

This original drama-fantasy series is topbilled by one of today’s hottest young love team on Philippine TV – Barbie Forteza and Derrick Monasterio. With the recent success of their tandem in the primetime drama Luna Blanca, they are back as they relive their onscreen love team as Mariposa and Inigo on GMA’s early prime series.

The series tells the story of Mariposa (Barbie), who belongs to the kingdom of the butterfly people, known as Paroa. However, she will grow up in the human world because their kingdom got destroyed. Her mother Aurora (Tanya), the queen of Paroa, will save her from the destruction of their kingdom.

Thus, Mariposa will grow up under the care of Amalia (Agot) who treats her as her own child despite her strange looks – Mariposa’s skin is similar to a higad. Despite people making fun of her because of her looks, Mariposa will still have a cheerful and optimistic disposition. However, her life will change when she transforms into a beautiful Paroa.

Meanwhile, Inigo (Derrick) will grow up hating the Paroas because her mother Rosanna (Alicia) told him that his father died because of them. He will be Mariposa’s high school classmate. He has a bad-boy image and always gets kicked out from school that’s why he is still in his sophomore year. Inigo and Mariposa will be friends but because of peer pressure he will also mock and make fun of Mariposa.

However, when Mariposa transforms into a beautiful Paroa, Inigo will like and develop feelings towards her not knowing that she is the same girl who he mocked and at the same time a Paroa who he grew up hating.

With Mariposa’s transformation into a beautiful Paroa, she will face the biggest decision in life. Will she choose Aurora, her real mother or Amalia, the person who raised and treated her as her own child? What will happen when Inigo finds out that Mariposa, the girl she likes is a Paroa?