Justice without lawyers at the People’s Court

Created through the Supreme Court’s special rule of procedure, the Small Claims Court is the justice system’s solution to air grievances and fight for the rights of the common Filipino through a convenient and affordable platform.
“The Supreme Court hopes to increase the access to justice of indigent and disadvantaged Filipinos through the inexpensiveness, accessibility and expediency of the Small Claims Court,” said Supreme Court administrator Midas Marquez.
The Small Claims program in the country is a pioneering effort of the United States Agency for International Development (USAID) through the American Bar Association Rule of Law Initiative (ABA ROLI) to improve access to justice for indigent Filipinos and has been in effect since October 2008.
From damaged property to money owed 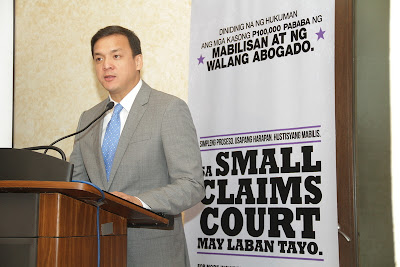 The Small Claims Court can hear and decide civil claims amounting to P100,000 and below, not including interests and costs. Ordinary litigants can prosecute and defend a Small Claims Case without the participation of lawyers.
Claims filed under these courts include actual damages to vehicles, other personal property, real property and person; money owed under a contract of lease, loan, services, sale or mortgage; and civil actions such as payment of money covered by bounced or stopped checks.
Fighting for your rights in four steps
For claims not more than P100,000, a four-step process assures an inexpensive, informal and simple settlement of cases  in the Small Claims Courts.
First, the claimant must file the documents, evidences and affidavit needed for your cases at the Clerk of Court in your municipality. Then, he or she must pay the P1,000 fee per claim for indigents. Additional fees may be charged for non-indigent claimants.
Third, claimant must wait for the “summons of hearing” as the case is being raffled by the court. Once called, one should appear before the designated Small Claims Court on the hearing date for the final decision and settlement mandated by the judge.
The process allows the parties to handle their own case from beginning to end with ready-made forms and non-strict procedural rules, without the need of a lawyer.

Accessible, swifter justice for all
According to the Supreme Court, the purpose of the Small Claims four-step process is to provide an efficient means for the masses to settle disputes involving monetary claims instead of the regular civil process.
“Most Filipinos have a misconception that taking disputes to court is time-consuming and costly, and thus, justice is only afforded to the affluent. In the Small Claims Court, the process is simple, the settlement is done face-to-face and justice is achieved quickly,” said Marquez.
In the Small Claims Courts, judges pass decisions based on facts presented and evidence elicited in a single hearing. Prior to the hearing the case on merit, judges attempt to convince parties to arrive at an amicable settlement in the barangay as decisions made through the Small Claims Courts are final and cannot be appealed.
All first level courts which include Metropolitan Trial Courts, Municipal Trial Courts in Cities and Municipal Circuit Trial Courts are designated as Small Claims Courts.
by Eccentric Yet Happy