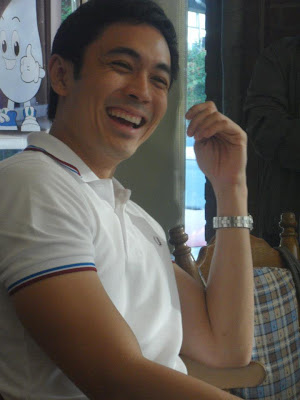 Filipino-Chinese actor and big winner of ABS-CBN’s popular reality show “Pinoy Big Brother Unlimited,” Slater Young, received today a franchise from Crystal Clear, one of the country’s popular brands of bottled drinking water.
Young was a recent visitor at Crystal Clear’s Pasig office to claim his prize, a P2 million prize consisting of of Crystal Clear products and franchise that Young can open in any area of his choice. The franchise was just one of several prizes Young received as “PBB Unlimited” big winner, which include a P2 million-peso cash prize, an appliance showcase, an Asian tour package and an Internet TV.
Young, who hails from Cebu, was the show’s first-ever male housemate who won the coveted prize after amassing 40.02% of total votes from the show’s avid followers.
Born “Jan Slater Lee Young” in December of 1987, he is the eldest in a brood of four, which may have been his biggest advantage in terms of his relationship with other housemates at PBB.
Armed with a Civil Engineering degree from the University of San Carlos in Cebu, Young was just like any typical individual who had his share of good deeds and also misdeeds. However, he was able to learn from all these and managed to come out a better person, thanks to the guidance of his parents, who taught their son the values of hard work and perseverance in order to achieve his dreams on  his own.
An acknowledged adventurer, Young is also a competitive shooter and a member of his school’s table tennis varsity team and his sense of adventure and knack for trying out anything new and unique pushed him to join PBB.
“Crystal Clear is proud to be associated with such a hardworking and independent-minded individual such as Slater Young, a person driven and determined to achieve his objectives in life. We hope that by putting up his own Crystal Clear franchise, he’d be able to accomplish more of what he wants in life and be able to help other people as well,” declares Asun Soler, Corporate Communications Head of Solerex Water Technologies, Inc., makers of Crystal Clear.
Crystal Clear is the leading brand of purified drinking water now found in many homes and even offices nationwide. Owned by Solerex Water Technologies, Inc., an all-Filipino corporation engaged in the sale, franchising and management of Water Refilling Stations (WRS), is committed to deliver fresh, crisp, great tasting and most especially safe drinking water such as Crystal Clear to as many Filipinos as possible.
Crystal Clear surpasses the standards of US-Grade Quality of water with their state-of-the-art Reverse Osmosis SLX Systems that eliminate inorganic minerals and chemicals for it to be absolutely safe any time of the year.
For more about Crystal Clear water and franchising opportunities, visit www.crystalclear.com.ph.
by Eccentric Yet Happy