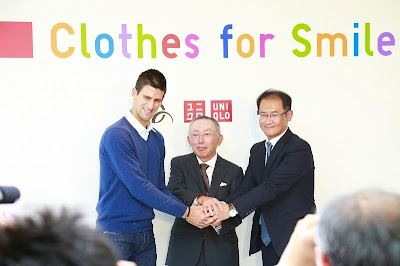 UNIQLO today announces the launch of “Clothes for Smiles,” a program developed in collaboration with professional tennis player and UNIQLO Global Brand Ambassador Novak Djokovic. Through this initiative, the company will establish a U.S. $10 million* fund and use it to bring smiles to kids all over the world, nurturing their dreams and giving them the tools to build a better and brighter future. The fund will be established from the sale of HEATTECH and Ultra Light Down items during the 2012 fall/winter season.

“Clothes for Smiles” will be comprised of two programs, at U.S. $5 million* each. One program will accept ideas from around the world to give children a better tomorrow, and the second will be an initiative to provide support to programs aimed at improving children’s education, through a global alliance agreement signed between UNICEF (United Nations Children’s Fund) and Fast Retailing.

Commenting on the launch of “Clothes for Smiles,” Tadashi Yanai, Chairman, President & CEO of leading global Japanese retailer Fast Retailing, said, “I am very pleased to launch today ‘Clothes for Smiles,’ the first fund to be established by UNIQLO, in partnership with Novak Djokovic. This is an innovative CSR initiative in terms of its scale, type of support provided, and its style of accepting ideas for the fund worldwide. ‘Clothes for Smiles’ will serve as one of UNIQLO’s major CSR activities alongside ongoing initiatives such as the All-Product Recycling Program and the social business.”

UNIQLO Global Brand Ambassador Novak Djokovic said, “I feel honored, and indeed very excited, to have collaborated with UNIQLO in developing ‘Clothes for Smiles,’ a totally new program that aims at giving children of all ages a chance for a better future. I hope many people from all around the world will help to support this initiative and in doing so will bring smiles to children everywhere.”

Details of “Clothes for Smiles”
“Clothes for Smiles” will be comprised of two programs, at U.S. $5 million* each. One program will accept ideas from around the world to give children a better tomorrow, and implementing them. The second program is intended to provide support to programs aimed at improving children’s education, through a global alliance agreement signed between UNICEF and Fast Retailing. The program will initially provide support to Bangladesh, China, Philippines and Serbia, with more countries to follow.

*Dollar amount of the fund may vary according to the exchange rate.

How to be Involved in “Clothes for Smiles”
UNIQLO welcomes ideas for how to give kids a better tomorrow from people everywhere. The company would like to receive ideas for how to use the fund and asks the public to do so via a dedicated website www.uniqlo.com/smiles. Customers can support “Clothes for Smiles” just by purchasing one or more HEATTECH and Ultra Light Down items sold during the 2012 fall/winter season.

How to Share Ideas for the Fund/Idea Selection Process
Through our project website, www.uniqlo.com/smiles, UNIQLO welcomes ideas from around the world to give kids a brighter future. The website will be available in 9 languages: Japanese, English, Chinese Simplified, Chinese Traditional, Korean, Thai, French, Russian and Serbian, and it will accept entries for ideas in a total of 13 languages (Spanish, Portuguese, German, Italian, in addition to the above 9 languages). Japanese and English websites will be available initially, with other languages to follow.

Entries will be accepted from October 16, 2012 to December 31, 2012, and they will be available on the website for the public to view freely and comment on. The final selection will be made by a panel of judges that include, Nobel Peace Prize recipient Muhammad Yunus, architect Tadao Ando, Novak Djokovic and Fast Retailing Chairman, President & CEO Tadashi Yanai. The ideas selected by the panel are scheduled to be implemented from around March 2013.

Background and Launch of “Clothes for Smiles”
Since the appointment of Novak Djokovic as UNIQLO Global Brand Ambassador, announced in Paris on May 23, 2012, both parties have been discussing various measures to realize their common, mutual desire to improve people’s lives and contribute to society. As a result, UNIQLO has come to a decision to launch “Clothes for Smiles,” a program aimed at bringing smiles to kids all over the world, nurturing their dreams and giving them the tools to build a better and brighter future.

UNICEF and Fast Retailing have signed a five-year global alliance agreement that will provide support to programs aimed at improving children’s education, initially in Bangladesh, China, Philippines and Serbia, with more countries to follow.

UNICEF works in 190 countries and territories to help children survive and thrive, from early childhood through adolescence. The world’s largest provider of vaccines for developing countries, UNICEF supports child health and nutrition, good water and sanitation, quality basic education for all boys and girls, and the protection of children from violence, exploitation, and AIDS. UNICEF is funded entirely by the voluntary contributions of individuals, businesses, foundations and governments. For more information about UNICEF and its work, visit www.unicef.org

Djokovic serves as a UNICEF National Ambassador in Serbia, and he established the Novak Djokovic Foundation in 2007. Through his foundation, he supports projects that help improve the lives and educations of young people in Serbia. For more information on the Foundation, please refer to www.novakdjokovicfoundation.org

Novak Djokovic is involved with the “Clothes for Smiles” initiative in his capacity as UNIQLO Global Brand Ambassador.