Differently colored stripes and circles have colonized the big columns near the southern end of EDSA. These are the columns holding up the overpass where EDSA splits into an elevated road turning left towards the airport; otherwise into a ground level EDSA going straight for Roxas Blvd. The variously high pillars—now in-the-round surfaces for a series of paintings with curious place names in —now hold up art as well as people and vehicles.

A Singapore-born London resident composed the artwork, under a commission from the Boysen KNOxOUT: Project EDSA. This artist, Erika Tan, with the project curators, first of all chose these columns for particular qualities and associations. The pillars are lined up in a particular dirty stretch of EDSA, which could use a facelift. The fat roundness of each column offered a delightful challenge to an artist who is also an anthropologist, and therefore takes interest in the infrastructure of specific places. The columns also form a kind of colonnade—although instead of the colonade of its Classical genesis, which conveyed grandness, this EDSA sequence of posts literally bore the troubled weight of EDSA commuters. To a visual artist who is not only an anthropologist as well but also a filmmaker, this is one appealing colonnade indeed.

As the project curators anticipated, Erika Tan decided to deal directly and literally with the specifics of the project; and of EDSA itself. The project is an environmentalist-cum-artistic effort at cleaning the incredibly polluted air on the longest ring road through the 17 cities of Metropolitan Manila. The medium for air-cleaning is Boysen’s product, KnoxOut, which deals with deadly nitrogen oxide in the air by changing the compound into nontoxic stuff. Sunlight triggers the change. Rain washes out the residue. The entire proposition, embodied by paint and project, is straightforward. 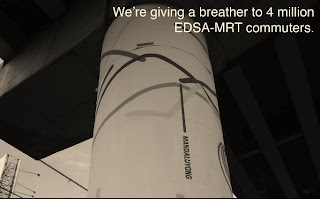 Responding with an equally uncomplicated concept, Erika Tan created a composition out of air pollution graphs produced for a number of cities. She wrapped the linear graphs around the columns—one graph a column—and re-assigned colors to the bars schematizing relative pollution levels. After the painting of the columns concluded, commuters catch, even at the corner of their eyes, a visually exciting play of lines and the occasional spherical form. In Tan’s and the curators’ view, it does not matter if the commuters regard this work as pure visual pleasure.

The pollution statistics are not meant to convey information. They are meant, instead, as precisely the “matter” to be cleaned out by paint and project.

The work thus operates on two levels, firstly, as refreshing alternative to grimy pillars in grimy surrounds; and secondly, for those so inclined, as evocation of the pollution the paint and project combats. Tan has produced a work of art from the distance of her home in England, without once coming to the Philippines. She is the only one of the eight artists of who endeavoured a site-specific artwork that can equally speak for purely conceptual projects.