Do you want to stay fit and healthy? Recently, students from University of the Philippines have their project named: Shift. Their desire to have a secure parking space for bicycles whenever their travelling inside the campus, and also to reinforce the advocacy of biking as a greener transportation alternative. 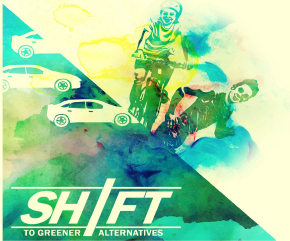 Major buildings at the University of the Philippines lack the appropriate racks where students can securely park their greener mode of transportation. Since parking space for bicycles were very limited, students were discouraged to use bicycles. The idea of impracticality of riding a bicycle due to the drastic changes in weather also affected the number of students who use bicycles to transfer from one class to another. The “SHIFT” team, the group behind the project, decided to create an event that would not only benefit the welfare of the students but also launch a cycling revolution that can save the environment. One of the goals of the project is to address environmental issues such as the excessive emission of greenhouse gases caused by vehicles thus paving the way for a campaign for cleaner air by SHIFT-ing to greener alternatives when travelling.

In addition, road safety has also been one of the off shoots of this activity since a lot of cycling accidents happen around the area. Running for the use of the lack of cycling lanes and education of the everyday motorists about road sharing. The boom of Fun Run events compelled the team to include running as a part of the event. Since running is also one of the top recreations in the university and has been a recent trend at the metro, it became a magnet for the involvement of more people in the advocacy.

Running aficionados and cycling enthusiasts will converge on March 24, 2013 at UP Academic Oval and some major roads in the vicinity, is hoped to be the first of many advocacy events for cleaner air and road safety to all of us.

The proceeds of the event will go to the promotion of cycling as a greener choice in transportation. It will benefit the welfare of the students through the installation of bicycle racks in major buildings in UP Diliman and the launching of a rent-a-bike program in the University.