Mar 2, 2013
Here is the statement of Mrs. Cynthia Villar regarding the nursing schools issue that was discussed on GMA News’ ‘Pagsubok ng mga Kandidato’ program which was aired last Feb. 23, 2013. 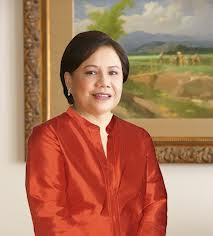 Question asked by Winnie Monsod: How can you reconcile your desire to help the poor at pagpanig niyo sa may-ari ng nursing schools na gusto sanang ipasara ng Technical Nursing Committee at ng CHED?
The question refers to a situation that happened in 2005 when I was still a congresswoman and was the Chairperson of the House Committee on Higher and Technical Education. The Commission on Higher Education (CHED) ordered the closure of some (30 plus) nursing schools, mostly in the provinces, because they were not able to fulfill certain requirements—particularly having a tertiary hospital.
So, the House Committee, which I chair interceded and urged all the parties involved, CHED and the nursing schools, to find a common ground that will serve all their interests, including that of the students. CHED, of course, has to exercise its mandate of regulating the quality of the schools. The schools and their owners have to protect their investments.
The students, however, were the ones who stood to be most affected and disadvantaged. So, personally, I was concerned about the nursing students, who also approached me because closure of their schools will mean their displacement. They just wanted to finish their courses and start working.
I carefully assessed the situation. It was brought to my attention that as per the nursing curriculum, the tertiary hospital is not needed until the third and fourth year of the course. And many nursing students, in fact, did not want to complete the entire course. During that time, there was a boom in high-paying, care-giving jobs available abroad. So many students wanted to be qualified for such. They requested that maybe they can be given certificates when they complete two years of studies. Those who want to and can afford to transfer to other schools, with tertiary hospitals, can do so. And those who cannot and want to work as caregivers would be allowed to do so also. Many students clamored for such an option…they wanted to have a certificate to be qualified as a caregiver.
While we were hearing the issue in the House Committee, we were overtaken by events. One school filed a case against then CHED Commissioner, Fr. Rolando V. De la Rosa. Fr. Dela Rosa then decided to resign and just go back to University of Santo Tomas (UST), where he was Father Rector.
The nursing schools and their owners also questioned the composition and competence of CHED’s Board of Advisers. According to them, they were not given due process and their schools were closed without even a prior notice. So CHED revamped its Board of Advisers, so the interest of the small schools in the provinces will also be represented in the board.
The issue was really beyond me. I just interceded as chairperson of the House Committee on Higher and Technical Education. I have no power neither over CHED nor the nursing schools. As I said, my conciliatory efforts were overtaken by events—the charges filed by the schools against CHED officials.
The 30-second limit for me to answer the question posed on the news program was too short to give the complete details surrounding the issue. I hope that this statement will clarify the issue. Thank you.
by Eccentric Yet Happy