The Voice Shakes It Up for Season 4

Mar 18, 2013
What’s better than one season of The Voice per year? That’s right – two seasons in 12 months! Hot on the heels of a compelling Season 3 which crowned Team Blake’s Cassadee Pope as winner, the new season coming in April 1, 2013 (Monday) 8.10PM exclusively on AXN is guaranteed to shake things up in a big way. 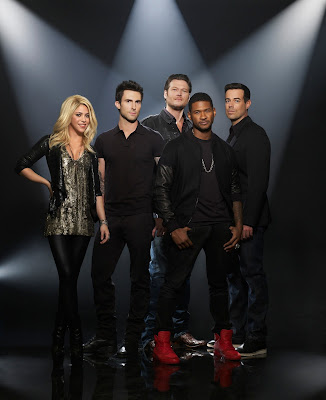 During the finale, the coaches’ tender rendition of Green Day’s ‘Good Riddance (Time Of Your Life)’ struck a chord with many fans, and finally set the coaches’ exit in stone for the next season. Christina Aguilera and Cee Lo Green are taking a brief respite from the show for career commitments, while R&B superstar Usher and the Latina, hip-shaking Shakira will step in to fill the void. An interesting change indeed, especially with Usher who did have the foresight to sign on Justin Bieber, one of the decade’s most successful teen pop stars. The talented Shakira would also be juggling motherhood and her new TV stint, having just given birth to a beautiful baby boy named Milan.

What would the chemistry be like between old-timers Adam Levine and Blake Shelton, and the newbies Usher and Shakira? After all, one of the selling points of The Voice has been the easy banter among the old foursome, beyond the bromance between Adam and Blake, and the competing wardrobe between Christina and Cee Lo, both outlandish in their own ways. Lending a clue to the new team’s dynamics is the latest US promotional trailer for Season 4, where Adam and Blake pick up the new coaches (and make them sit in the back), squabble over the choice of radio stations, and end up with them all singing along to the corny ‘Total Eclipse of the Heart’.

Giving his new co-stars the thumbs up is Adam, who sums it up nicely to TV Guide, “Christina and Cee Lo are so close to my heart because we went through the show becoming a success together, and Usher and Shakira are coming into it as a big frickin’ instituition. So it’s different, but it still feels good, because they’re legitimate artists.” And it seems there might just be a third party in the Adam-Blake bromance, with rumours of Usher and Blake getting along great and Usher bringing out Blake’s ‘inner MC Hammer’. Now, that is something we would want to see!

The Voice clinched four Emmy nods in 2012, and as the only music reality series to be nominated in the category last year, the show beat out rival American Idol, the first time in 10 years Idol has been left off the ballot! In 2011, the novel vocal talent reality series first made waves in the entertainment industry with its refreshing approach to sieving musical talents – by having the four judges on spinning red chairs, back-faced to the talents so that all they can rely on are their ears. Now in its fourth season, the highly popular reality series continues to be helmed by host Carson Daly.

Coming this March 2013, within a week of the US premiere, is the Asian premiere of The Voice Season 4. We, like all other fans of the show out there, are excited about the radical new possibilities the new coach line-up will bring to the show – who will discover the next big talent? Will the Adam-Blake bromance become a triumvirate? And of course: who will fulfill the now-requisite quota of cleavage exposure?

Christina and Cee Lo, you will be very much missed.

First and Exclusively on AXN