Numerous studies have proven that organic barley grass is the potent super food containing important vitamins, proteins and minerals that are essential for the human diet.
It has seven times more vitamin C than oranges, five times more iron than spinach and 10 times more calcium than milk. Young barley grass also has more than twice oxygen radical observance capacity (ORAC) or antioxidant value found in 200 grams each of prunes, raisins, kale, raw spinach and grapes combined.  ORAC measures the ability of a plant to neutralize harmful free radicals that are the culprit in lifestyle and age-related diseases. 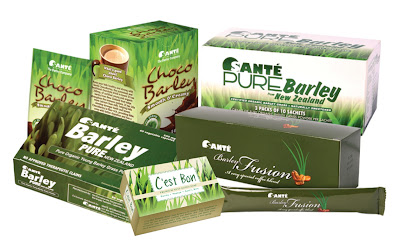 With these components, it’s not surprising that barley used by many as an excellent countermeasure against heart diseases, cancer and diabetes, while some use it to combat anemia, asthma, dysmenorrhea, goiter, migraine, osteoarthritis and other common illnesses.
In today’s lightning-quick lifestyles and chemical and preservative-based foods, barley grass serves as the body’s balancing force against stress, fatigue and dreadful diseases. This trend is long foretold by the country’s top distributor of the finest barley powder from New Zealand: Santé International, Inc.
“Health is wealth indeed. Thus, through our products, we want to help our consumers maintain their everyday strength, while they perform their roles for the long run,” explains Jesus Joey Marcelo, Chief Executive Officer of Santé International, Inc.
Today’s barley authority offers five products that underwent a meticulous and patented manufacturing process but Marcelo discloses that the company will soon introduce new and exciting barley-based products that will surely benefit many.
Living proof for better health
Mercedita Alakar, a businesswoman, was bothered by body pains, constant weakness and incessant coughing after suffering from stroke and hypertension. “I took Santé Barley Pure New Zealand once a day and felt at ease afterwards. The ache on my nape was gone, my blood pressure went down and I’m no longer stressed out.”
Princess Jamila Cana, on the other hand, was diagnosed with neonatal pneumonia with clinical sepsis months after she was born on May 2010. In August of that same year, she was given Santé Pure Barley New Zealand by her mother. In three weeks’ time, Cana was healed of blood infection and her blood count normalized. She can now breathe normally and play actively. Meanwhile, the family of metal cutter Renato Ualdan, who suffered from stroke and was once bedridden, took Santé Pure Barley twice a day. He gained his strength and appetite, and his skin color and blood pressure also improved.
The stories of Alakar, Cana and Ualdan are living proof of the findings of world-renowned Japanese scientist, inventor and pharmacologist, Dr. Yoshihide Kagiwara, who said that barley “is the only vegetation on earth that can supply sole nutritional support from birth to old age.”
Santé Barley also helps people who are constipated, has slow metabolism and weak immune system. Its high-fiber content helps promote regular bowel movement and acts as detoxifier that removes heavy toxic metals in the body. Its young grass is rich in chlorophyll, a deodorizer that helps control bad breath, urine and fecal odor and body odor.
Aside from the two major brands, they also have Santé Choco Barley, a chocolate drink dedicated to help kids’ little tummies in terms of digestion and make them more energetic in school and at play. This energy booster also reduces wheezing and inflammation commonly associated with asthma. For coffee connoisseurs, they would surely love Santé Barley Fusion, the new great tasting adventure to wake up their senses. And to defy skin age, there’s Santé C’est Bon, with papaya extracts that lighten skin along with goat’s milk that moisturizes and exfoliates dead skin.
To ensure product credibility and reliability, Santé uses only barley grass certified by BioGro New Zealand’s leading organic certifier. This assures users that Santé barley grass does not contain unsafe levels of heavy metal, herbicide and insecticide residues. Furthermore, Santé products contain no pork, lard or other elements of impurities defined under Islamic Law so therefore, Halal certified.
For more information about Santé products, visit www.santebarley.com.
by Eccentric Yet Happy