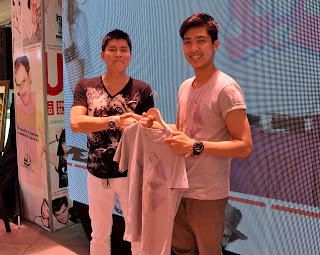 The innovative approach builds on the traditional pop-up shop concept, with large-scale pop-up shops in central metropolitan locations offering a limited, dedicated product mix. The initiative aims to broaden UNIQLO’s reach to its customers, to make fashion accessible to everyone and in unique and interesting locations.

As part of the latest initiative, UT POP-UP! shops offer UT CAMERA, a new smartphone video app that turns one second personal looped video portraits into animation. Users can download the UT CAMERA app to their smartphone (iPhone and Android) to convert their video. The footage can then be uploaded to the official UT website (ut.uniqlo.com) for those sporting UT apparel, and linked to Facebook, Twitter, and more for all users.

Filipinos can expect the same UT experience at other UT POP-UP locations worldwide. A huge UT sign is set-up right at the center of Ayala where one can see the various UT designs as well as other culture and arts display. UT CAMERA was also set-up and everyone is welcome to pose for a photo that can be seen globally. Those who wish to purchase new UT designs at a huge discount, a UT store is just across Ayala Triangle, at the 2nd floor of Paseo Center.

The event was also graced by one of the UT Grand Prix 2013 (UTGP ’13) runner up, Karlo Victoriano, a motion graphics designer in one of the country’s biggest TV networks, also a graduate of Bachelor of Arts major in Multimedia Arts at Asia Pacific College.

UTGP is an annual competition in which design professionals and enthusiasts from all over the world are asked to design a UT (Uniqlo T-shirt) centered on a set theme and submit it to the contest. The submitted designs are shortlisted and then judged, and the winning designs will become part of UNIQLO’s UT Collection that will be sold globally.

This year’s theme for UTGP centered on iconic music artists of the past decades, namely, AC/DC, David Bowie, Madonna, Kiss, Sex Pistols, and The Who. The beauty of this year’s UTGP edition, however, is that not only are these artists going to be featured in UNIQLO’s UT shirt but they will also be judging the submitted UT designs themselves.

Karlo based his design on the portrait of Madonna seen on her “True Blue” album, her third studio album released back in 1986. The portrait was drawn with various geometric shapes overlaid with colored triangles.

Catch the winning and runner up designs, including Karlo’s, at UT POP-UP! MLA. The designs will be available in all UNIQLO stores worldwide this summer.