May 20, 2013
The Department of Education (DepEd) led by Secretary Br Armin Luistro launched the 2013 National Schools Maintenance Week or Brigada Eskwela at the Philippine School for the Deaf. Scheduled on May 20-25, this year’s Brigada, which is on its tenth year, carries the theme “Isang Dekada ng Bayanihan sa Paaralan.” 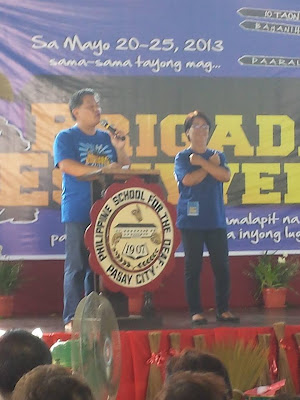 “[Ang Brigada] ang pinakamahabang pagpapakita ng people power sa Pilipinas,” [The Brigada is the longest manifestation of people power in the Philippines] Luistro said, adding that ordinary citizens’ participation in the event is proof that heroes still abound.
Brigada Eskwela is a nationwide voluntary effort which started in 2003, bringing together teachers, parents and the community to do clean up and repairs in public schools to prepare the facilities for the June school opening.
Undertaken in all public schools every third week of May or two weeks before classes begin, it is participated in by private organizations, individuals, national and local government agencies, local businesses, and international organizations and foundations, among others.
Volunteers paint classrooms, repair furniture, and clean up the school grounds. Materials and supplies are usually donated by the parents or by private businesses and foundations.  Luistro pointed out that Brigada Eskwela encourages the public to share their time, strength and resources in kind. “We do not accept cash,” he emphasized.
In 2012, Brigada Eskwela pooled more than P1.5 billion-worth of resources-in-kind and man hours by over 6 million volunteers in various parts of the country.
by Eccentric Yet Happy