Last Saturday, one of the highlights of recent concluded iBlog 9: The Philippine Blogging Summit and it was held in Malcolm Hall, UP Diliman is doing Gwiyomi gesture.

Few months ago, there’s an upbeat song that keep on playing on the radio from a South Korean pop singer named Hari. 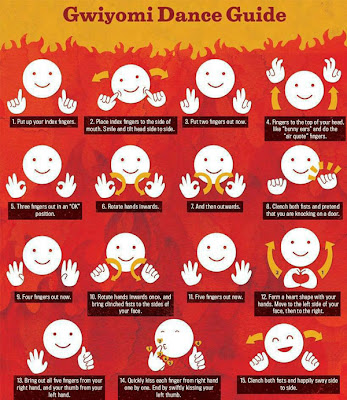 The Gwiyomi Song, or Kwiyomi Song was released on February 18, 2013. It was inspired by a gesture from rapper South Korean Jung Ilhoon of boy group BtoB. The said gesture is called ‘Gwiyomi Player’.
In October, 2012, the said gesture became an Internet meme. And it was followed by an appearance on the South Korean reality show by SBS MTV named MTV Diary.
Thesaid song went viral after Korean Media outlet Sports Seoul uploaded a video clip of Hari performing the gestures and singing the song.Gwiyomi/Kiyomi means “Cute person” in Korean.
Then, it became very popular in several countries such as Thailand, Philippines, and other Southeast Asian nation wherein teenage girls recreated the said cute gesture.Here are some videos from our Pinoy talent like Cosplay Queen Alodia Gosiengfiao, singer Yeng Constantino, and others who made the said cute Gwiyomi video online.
by Eccentric Yet Happy