Jul 23, 2013
LINE, the world’s hottest mobile messenger, has announced that its user number has surpassed the 200 million-milestone on July 21, only 25 months after its initial launch. 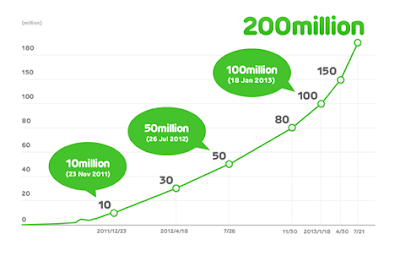 LINE was first launched in June 23, 2011 as a free communication messenger available across multiple devices and network carriers around the world. Based on its easy-to-use features and entertaining services, LINE has attained widespread popularity in many regions and has already been ranked No. 1 in 47 countries, including the Philippines.

In addition, the Philippines has been seeing a lot of LINE lately with the launch of its newest and first localized television commercial, starring young celebrities Matteo Guidicelli and Jessy Mendiola. The brand new ambassadors have also launched their own Official Accounts and personalized stickers. Joining Matteo and Jessy with new Official Accounts is rapper Abra as well as music industry bigs MCA Music and Ivory Music.

LINE will continue to evolve into the most exciting and innovative social platform that provides an entire mobile ecosystem of apps, features and services to users worldwide and business partners as well.

**To celebrate LINE’s 200 million-milestone, the following stickers will be available for FREE download for a limited time!