The Prevalence of Lice Infestation among Filipino Children

In 2000, it was estimated that around 9 million students or 84% of the total public school children population in Metro Manila and in some provinces, were carriers of head lice. Pediculosis or “kuto” affects children aged 7 to 12 years. Students from Southern Tagalog and Western Visayas were found to have the largest number of pupils affected by head lice. Head lice affects children’s performance in school and creates social stigma against those with this condition. The problem has greatly concerned education officials that the DepEd launched a program to address the problem in 2000 by giving out anti-lice treatment. Head lice are tiny parasites that bite the scalp and feed on human blood. According to the US National Library of Medicine, lice can survive on human head for up to 30 days. Their eggs or what is called nits, hatch after nine days and the larvae mature after another nine days. The bites from lice can cause severe scalp itching and in some cases red bumps on the scalp. Lice infestation is easily transferred through personal contact. While it is not considered as a serious condition, the social stigma attached to this condition is uncomfortable to many. Some people connects lice infestation to low hygiene and poor economic status. But in the United States, according to the US Centers for Disease Control and Prevention, between 6 to 12 million kids aged 3-11 years old are infested with lice every year. Here are ways to avoid head lice infestation: 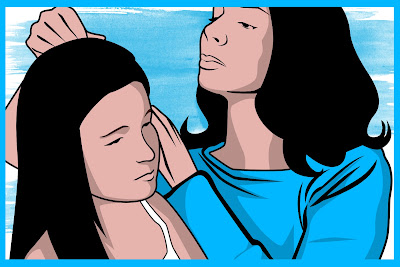 • Tell your kids to avoid sharing hairbrushes, hats, hair bands, or any hair accessories to other children.

• Inspect your child’s head regularly and look for lice or nits. If you find any that is already a sign for you to act immediately to avoid the lice from multiplying.

• It is also important for you to teach your kids to be aware of the signs of lice infestation like itching of the scalp.

Remember not to panic when you find that your child is infested with lice. Children can be very sensitive when they feel that they are being treated like they carry a contagious disease. There are a number of treatments for head lice. You may consult your family physician for the best treatment as there are products that contain insecticide and may be harmful to your child. One product in the market that many moms recommend is Licealiz, a head lice treatment shampoo with conditioning formula manufactured by Lamoiyan Corporation. Heidi, 29, is a regular user of Licealiz. A mother of three boys aged 8, 6 and 2, Heidi shared that she never imagined her boys would be affected by lice until she saw one on her eldest son while combing his hair.

“I always thought only girls can be infested by lice. I was shocked when I saw it on my son’s hair, near his nape. I don’t know if he got it from me or from his classmates or maybe from the surroundings,” said the young mother from Mandaluyong.

She immediately researched on the best treatment and found the blog of another mom who tried Licealiz.

“The shampoo really smells good. Bonus is that, it’s very cheap. Everyone in the house used it until the itchiness and the lice were all gone. I’ve been recommending it to my sisters and my in-laws ever since,” Heidi said.

Michelle, 32, noticed her daughter’s habit of scratching her head. Bothered, she bought a lice comb and used it on her. To her dismay, indeed, she found several matured lice. When she told her best friend about her daughter’s problem, she was advised to try Licealiz.

“My best friend Ella had tried it on her daughter, too. What I like about Licealiz is that it smells good and makes my daughter’s hair really soft. She loves it,” the mother from Cebu City shared.

Like many mothers, chances are your children may also be infested by the tiny crawlers. Discovering lice on your child’s head should not be cause for an alarm. Go to the nearest drugstore and grab Licealiz. Licealiz is non-toxic and is safe to use regularly even for young children. Using it often keeps lice from coming back. Unlike other brands, Licealiz’s active ingredient, pyrethrin, is all natural and extracted from chrysantimum flowers. It not only makes your child’s hair smell good, it also nourishes and make the hair grow healthier.
by Eccentric Yet Happy