Villar Foundation is now accepting nominees for its first ever Villar SIPAG Awards on Poverty Reduction.

Villar Foundation’s livelihood enterprises include water hyacinth weaving, coconet weaving, organic fertilizer making, charcoal making, citronella oil making, handmade paper-making, and producing school chairs out of waste plastics. These have been benefiting over 500 families in Las Pinas and have been duplicated in 242 towns and cities nationwide.

During the launching of Villar Social Institute for Poverty Alleviation and Governance (SIPAG) Awards on Poverty Reduction, Senator Cynthia Villar said about on how SIPAG started: “When we opened the doors of Villar SIPAG, December last year, Manny and I emphasized in our speeches or remarks that the name of this place is anchored on SIPAG primarily because ‘sipag’ or hard work coupled with perseverance (tiyaga) are values that we both hold in high regard in ourselves and in other people as well. Dahil kami ay naniniwala na ang kasipagan ay susi sa pag-ahon ng isang tao mula sa kahirapan. Ang sipag at tiyaga ay naging malaking bahagi rin ng aming pag-angat sa buhay.” 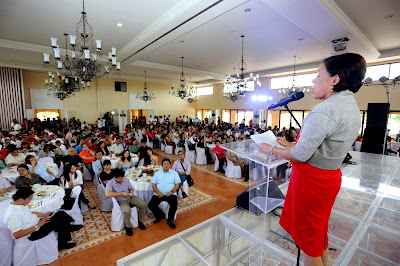 Poverty continues to be a major development challenge for the Philippines. The awards hopes to contribute to reducing income poverty by recognizing and promoting Philippine innovations in poverty reduction at the community level which created jobs and increased household income especially for the vulnerable sectors.

The awards program targets community enterprises owned and managed by local residents having a democratic governance structure with one member one vote system accountable to its general membership. Not subsidized by government or supported by philanthropy, they generate revenues through a wide array of initiatives like trading or by providing services for a reasonable fee needed by various sectors. Any profit or surplus generated is reinvested in the community or distributed among its members.

The objectives of Villar SIPAG Awards are:

• To document and share these outstanding initiatives through the SIPAG Resource Center;

• To inspire exchange, transfer or adaption of these outstanding initiatives to other places in the country through action research, capacity building, conferences and symposia;

How they do the screening and the selection process of Villar SIPAG Awards:

The process starts with either a direct application or a nomination by any individual or organization by submitting the prescribed nomination form.

Once nominated, the nominee is informed and requested to fill out the preliminary application form to be submitted to Villar Sipag.

The validated potential awardees will undergo a second screening to identify the twenty finalists who will be invited for final interview by a selection committee to choose the top ten awardees. The top ten awardees (ranked from 1 – 10) will each receive a plaque and cash incentive of TWO HUNDRED AND FIFTY THOUSAND PESOS (PHP 250,000.00.) The next set of awardees (ranked 11 – 20) will also receive a plaque and cash incentive of ONE HUNDRED THOUSAND PESOS (PHP 100,000.00) each. The cash incentives should be used to start a new enterprise or expand the existing enterprise.

The said awards is being managed by the Villar Foundation’s Villar SIPAG (Social Institute for Poverty Alleviation and Governance), a hub of advocacies, activities and actions to help poor Filipinos.

Empowering the poor and the underprivileged has been a key advocacy of the Villar Foundation since it was established in 1995 by Senator Manny Villar and Senator Cynthia Villar, chairman and managing director, respectively. The Villar SIPAG plays a key role in the foundation’s efforts to combat poverty among Filipinos.

The Villar SIPAG serves as home of all their efforts and endeavors in fulfilling their advocacies. It is more than a showcase of the Villars’ past, present and future efforts to reduce poverty in the country. It is a working hub and a proactive center. Its name alone highlights and promotes the value of hard work as a tool in overcoming poverty. The Villar SIPAG will guide, train, teach and empower womenfolk, the youth, jobless and even relatives of overseas Filipino workers (OFWs) to uplift their lives as well as enhance their skills and know-how.

Nominations and applications will be accepted until August 30. Nomination forms and other details are available on Villar Foundation’s website.
by Eccentric Yet Happy