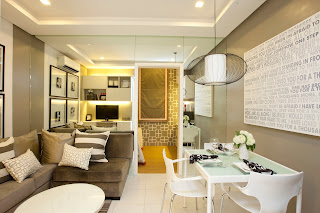 When some real estate developers are in a mad rush to name their projects after Western landmarks and locations, never mind if their designs don’t reflect these places, Vista Residences has stayed committed in building condominiums that embody and reflect the Filipino spirit.

“Beginning with the blueprint, we already think of ways and solutions to incorporate a distinct Filipino element into the design and architecture,” says Emma Amores, Corporate Communications Head. “We examine the historical implication of the site and determine whether it can be woven into the over-all structure. We don’t build arbitrarily. It’s important for us that our projects are conversant with their respective environments while at the same time providing the best possible residences for our clients.”

Probably the best development that reflects this philosophy is Vista Residences’ 515 Shaw, a two-tower heritage-oriented project located in the corner of Laurel Street and Shaw Boulevard in Mandaluyong City. The developer, contractor, engineers, designers and architects took pains in integrating the home of the late President Jose P. Laurel in its entirety to Shaw 515’s overall structure. Named Villa Pacencia after the late president’s wife, the house once served as the headquarters of the Nacionalista Party and the hotbed of political discussions. Hence, its importance to the historical, social and cultural life of the nation can’t be ignored.

“There was no doubt in our mind that the historical site should be preserved at all costs,” says Beth Kalaw, Division Head. “By taking this route, we have actually increased the value of the property because of its historical importance. Residents will soon encounter a more palpable kind of history as they examine the rooms and walk through the hallways of the Laurel Mansion.”

The balance of contemporary living is provided by a carefully masterplanned hub of commercial spaces which immediately offers leisure and recreational opportunities to residents. Other amenities include a kiddie/adult pool, function rooms and game lounges. Units that range from studio to one-bedroom to two-bedroom affairs are afforded with the view of the Wackwack Golf Course. It’s one of the few high-rise residential towers that boast of close proximity to three central business districts: Ortigas, Makati and Bonifacio Global City.

Another project that embodies the unique Filipino identity is Wil Tower, a two-tower, mixed-use development headlined by game-show host and Filipino icon Willie Revillame. While it may not have the historical strain of Shaw 515, Wil Tower taps into the Filipino penchant for entertainment, showbiz and spectacle as its location, Eugenio Lopez Dr. in Quezon City, is walking distance to the studios of ABS-CBN and GMA 7. Residents can now spot their favorite star from their perch anywhere from the tower’s 42 stories.

For an immediate retail therapy, residents can also check out the shops and restaurants, both foreign and local, located in the first four floors—the podium—of Wil Tower. Those who want to have a more enlarged shopping experience can choose between SM City North Edsa and Trinoma Mall which are just mere minutes from their residence. Aside from commercial hubs, Wil Tower is in close proximity to prestigious institutions of learning that include University of the Philippines Diliman, Miriam Collegeand Ateneo de Manila University.

A resident, at a given day, can be fully occupied with Wil Tower’s chockfull of amenities. These include a swimming pool, a fully-fitted gym, a spa, an entertainment room, an audio-video room, a game room and a day-care center. After watching a live variety show, he will now have a chance to relax.

The Filipino soul is also alive and well in KL Mosaic, a single-tower, 32-story project located atGamboa St. in Legaspi Village, Makati. The “KL” in the project’s name stands for Kalaw-Ledesma, a clan known for its passion for Philippine visual arts. Its matriarch Purita Kalaw-Ledesma served as the first president of the Art Association of the Philippines.

“For this project, we have subscribed to the idea of “art-chitecture,” that is, integrating arts into the fabric of the structure,” says Beth Kalaw, Division. “Its architectural shape, in the form of hexagon, veers away from usual building aesthetics, signifying its surprising, landmark-making identity.”

Each day, the residents will encounter Philippine visual arts at its finest with The Biggest Little Room, the gallery that will house the permanent collection of Philippine paintings and sculptures that the Kalaw-Ledesma family has accumulated through decades. Located on the ground floor, the gallery will also serve as a venue for local and foreign exhibitions, both by emerging and established artists.

With only 195 units, KL Mosaic, fronting Legaspi Park and Washington Sy-Cip Park, will be a definition in exclusivity, whether in a studio, one-bedroom or two-bedroom unit. A grand lobby will welcome guests and residents in its opulent interior while a coffee shop will provide the best venue for an espresso and a conversation. Amenities include a swimming pool, an exercise room and a recreation center.

“Through these developments, we hope to connect with Filipinos, whether here or abroad, on an emotional level since these towers embody a sense of the country,” Emma Amores, Corporate Communications Head. “Art and architecture need not always be Western as they can also be animated by the unique and memorable Filipino style.”