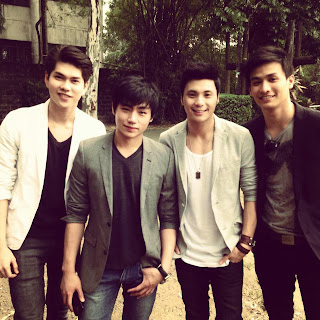 OPM band 1:43’s sophomore album,“Sa Isang Sulyap Mo” under MCA Music which contains the monster hit song of the same title reaped one of the most number of nominations in the 5th PMPC Star Awards for Music.

The band have four nominations for “Song of the Year,” “Album of the Year,” “Pop Album of the Year,” and “Best Duo or Group,” 1:43 joined the league Daniel Padilla, Gloc-9, Sarah Geronimo and Callalily as one of the most recognized recording artists in 2012 by the members of the Philippine Movie Press Club (PMPC).

1:43 is composed of four talented, charming, and stylish lads namely, Anjo Resurreccion, a University of Santo Tomas (UST) Psychology graduate and a MYX VJ Search finalist; Argee Golding, a bemedalled taekwondo athlete from UST; Gold Aquino, a Business Administration graduate from the Centro Escolar University (CEU); and Yuki Sakamoto, a Hotel and Restaurant Management student from CEU-Makati and the main vocalist of the group.
“We are truly honored to have been nominated in four categories in the 5th PMPC Star Awards for Music alongside with the most respected names in Philippine music industry,” says the group’s spokesperson Anjo.

“The recognition inspires us to advance our mission to bring back the Filipino youth’s interest to OPM,” he adds.

Released in 2012 as part of the Mang Inasal Mang-Aawit Music Advocacy Campaign, “Sa Isang Sulyap Mo” became one of the biggest hits. It became the No. 1 OPM song in many of the radio countdowns nationwide and was named by Youtube Philippines as one of the most viral videos last year after garnering a total of over 35 million views.

“Sa Isang Sulyap Mo” became the love song of this generation after it was used as the official soundtrack of “PBB Teens Edition” and the fantaserye “Juan dela Cruz” in ABS-CBN. It was likewise performed by 1:43 on KrisTV, Sarah G Live, Showtime, and ASAP to name a few.

The boy band’s follow up single titled “Ikaw At Ako” is now topping the radio charts. It became the “Most Wanted Song” of 97.1 Barangay LS FM and “Love Song To Memorize” of 90.7 Love Radio.

For booking inquiries, you may email 1:43’s manager Chris Cahilig at chriscahilig2011@gmail.com.
by Eccentric Yet Happy