PAE joins forces with Green Cross in the Fight against Dengue

The Philippine Association of Entomologists Inc. (PAE), the leading organization of insect experts in the country, has once again partnered with Green Cross, makers of Green Cross Insect Repellent Lotion, in disseminating information and promoting preventive measures to avoid the dreaded dengue disease. This mosquito-borne virus, an alarming health issue with a nationwide scale, has been an endemic presence in tropical countries such as the Philippines. 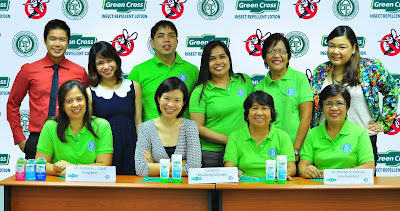 “We believe that spreading accurate, up-to-date information is a key area in our shared goal with Green Cross in order for people to be duly armed against the disease,” says Dr. Barbara Laviña Caoili, PAE president. “The first step is to clarify, if not outright debunk, misconceptions about how the disease spreads, and affects its victims.”

One of the misconceptions that the PAE and Green Cross want to immediately address is the notion that dengue-carrying mosquitoes only attack during the day. While this may be true with the species Aedes aegypti (usually recognized with the stripes on their body) that has peak biting hours between 6 a.m. to 8 a.m. and 4 p.m. to 6 p.m., another dengue-lamok, the Aedes albopictus, has been discovered to have peak biting hours from 6 p.m. to 8 p.m. and 11 p.m. to 1 a.m.

“Not much research was devoted on Aedes albopictus since this species, usually found in forests, didn’t have direct contact with humans previously,” says Dr. Caoili. “But as humans encroach into their habitats, the dengue-lamok has found another blood source to feast on, helping spread the dengue virus in the process. With its peak biting hours from late afternoon to late evening, dengue has become a round-the-clock concern.”

Another misconception that PAE and Green Cross wants clarified is that dengue only spreads during the rainy season since the rains create potential habitats for dengue-lamok in the form of stagnant water in potholes, vases, tires and other receptacles. While statistics show a dramatic rise of cases beginning from June to December and peaking during August, dengue incidents are reported throughout the year.

According to the official tally of the Department of Health’s National Epidemiology Center, there were 110,257 incidents of dengue infection in 2011 and 187,031 cases in 2012. Statistics for this year show a marked improvement as infection cases from the first six months dropped to 56,056 cases from 60,902 cases of the same period last year. However, dengue is still considered as one of the country’s main health threats.

What the statistics additionally reveal is the fact that dengue severely affect children and adolescents. “Based on data, 43.08% of dengue infection cases fell between the 5 to 14 years old range,” says Vince Camua, Senior Brand Manager for Green Cross. “This calls for a more concerted effort in reaching out to this demographic and a host of preventive measures that will help people combat this disease.”

One of these measures is an easy-to-use personal repellent that will serve as a barrier against dengue-lamok. Based on research, Green Cross Insect Repellent Lotion has been clinically proven to be effective and safe as a preventive measure in offering long-lasting protection against the two species of dengue-carriers, the Aedes aegypti and the Aedes albopictus.

Providing up to 10 hours protection from a single application, Green Cross Insect Repellent Lotion has been formulated to suit all skin types and to be hypoallergenic as well. It also has an anti-bacterial component, making it a more reliable insect repellent compared to the existing brands in the market.

“With the partnership of PAE and Green Cross, we hope to contribute to the well-being of the Filipinos by providing a safe and effective defense against dengue-lamok, as well as provide relevant and timely information to consumers through our various programs,” says Camua. Through the combination of information and prevention, people can take a more pro-active choice in their fight against this dengue.