Baguio-based band and North Luzon representative Even, whose song “Luminary” extols the virtue of holding one’s head up high, taking chances and being the best that you can be—important in this time of national crisis—was declared the first-ever “Converse Get Loud Band Competition” champ in the song writing & musical showdown held at Excess Superclub last November 9. 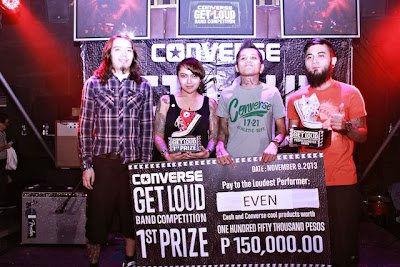 The band, which bested four other finalists chosen from major regions of the archipelago, also walked away with the People’s Choice Award by having garnered the most votes from Converse Philippines’ official Facebook page.

“First of all, we would like to thank everybody who voted for us online,” said Dyanne Licudine, the band’s vocalist, on their victory. “We were not expecting that much likes and votes. From the bottom of our hearts, we are really, really grateful to those who supported us since day one.”

One of the judges in the song-writing and performance competition, former Sugarfree lead vocalist Ebe Dencel proclaimed that he was blown away by Even’s electrifying performance. “It’s the tightest band that I have heard in a while,” he said. “It’s nice to see that musicians take advantage of the technology. Even really used it well.”

Another judge, Converse Philippines’ Sales Director Dan Mindanao mentioned that Even’s music is what “my target market wants. Since it says ‘Converse Get Loud,’ we got excited with the performance.” Other judges were music stalwarts and industry leaders Francis “Brew” Reyes, Mark Laccay and John Hendrix.

Even was founded by Dyanne, Jam Bumanlag (guitars), Coco Saupan (bass) and Dan Allan Acosta (drums) in May of 2007. Dyanne and Jam, who had been performing together since 2003, met Coco and Dan in the “infamous Baguio jam studio” called Feedback. The members decided on the name “Even” when they were flipping through a dictionary and hunting for that “one short and memorable word.” Since then, they have performed in various venues in the City of Pines and recorded full-length studio albums, with Retribution being the most recent.

Calling their music “Experi-Metal FX-tronica,” Dyanne said that it took a while before they finally settled into this kind of rock. “It was actually a long journey for us to find what kind of music that would fit us,” she said. “Yun talaga yung nag-fit sa personalities namin and sa influences namin kung ano talaga yung gusto naming parinig sa mga tao. I guess it’s the heaviness of it, the weight of it that drives us to write our music.”

With their Converse Get Loud Band Competition win, Even affirms Baguio City’s premier position as an artists’ hub. “We raised the flag of the Northerners,” Dyanne, who runs a tattoo shop called Musink, said. “We feel very proud that this happened and they gave us the opportunity to represent not only Baguio but the rest of Northern Luzon and Philippines for Converse.”

Asked what the future holds for them, Dyanne said that they just want to keep things even: “Write more songs, stick together and look forward to whatever plans Converse has for us.”

Eli Bonsol, Converse Philippines’ advertising and marketing manager, says that “Get Loud,” with its smashing success, aligns with Converse’s belief of unleashing the creative spirit of the individual. “With our global message, ‘Shoes are Boring, Wear Sneakers,’ we challenge our customers to choose sneakers,” she says. “Converse’s essence of self-expression is to speak up, to stand out and to make a difference.”

Even is proof that by stepping out of one’s borders, getting out there and making oneself be heard, one can achieve a self-defining moment. Even’s determination through the years of keeping their music true to their experience has brought them to “Get Loud” glory and a wider audience.

“We hope that through this competition, we have shown that Converse continuously strives to inspire creativity and to enrich Pinoy music,” Bonsol added. “We hope that through our own little way, we have been able to communicate the message and show you that ‘shoes keep it down while sneakers get loud.’”