When broadcast journalist Kat de Castro noticed that her nine-year-old daughter Khloe—an exuberant, active and outdoor-loving child—was falling ill and burning with fever, she immediately rushed her to the hospital. The doctors diagnosed the illness dengue in its early stage. “It’s a good thing naagapan kaagad,” Kat says. “We found out that she contracted it from her school. That was the time I decided that she should wear an insect repellent even when just going to school.” 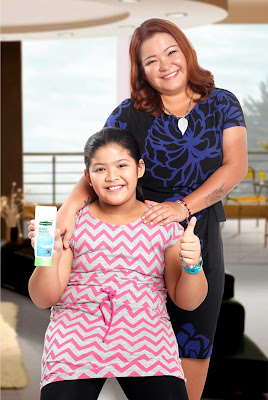 Kat found an ally in Green Cross Insect Repellent Lotion Gentle Protect, which is clinically proven to be safe for a child’s skin and offers protection against insect bites (specifically against the dreaded dengue-lamok) for up to eight hours.

“Green Cross is a brand that we have known for generations already,” she says. “Even my mom and my dad use it. When I found out that the company has an insect repellent lotion, hindi ka na magdadalawang-isip eh. You are assured that you are protected at walang magiging problema kasi trusted brand.”

As a host of the long-running travel show Trip na Trip where she was able to explore the most scenic and remotest part of the Philippines, Kat had sampled an array of insect repellent lotions to protect her from insect bites each time she was roughing it up in the mountains or having an adventure by the sea.

“With the other insect repellants I’ve tried, what I noticed was I became allergic mismo doon sa product,” she says. “So far, Green Cross is very hiyang to me and hiyang to my daughter’s skin considering na our skin is sensitive. Green Cross is the one na pinaka-OK and something that I can recommend to other travelers or trippers as well.”

Another draw of the product for Kat is that it’s long-lasting. Active Protect offers up to 10 hours of protection, which is perfect for her line of work, where she has to be outdoors very often. Gentle Protect, on the other hand, boasts up to 8 hours of light and non-greasy protection. With twice-a-day application, Gentle Protect essentially provides round-the-clock assurance against bites from dengue-lamok.

Aware that dengue has four viral strains and that having it doesn’t immunize oneself from contracting it again, Kat has become more vigilant than ever—both for her and her daughter’s health. She regularly removes all sources of stagnant water, checks vases for kiti-kiti and has her house fumigated.

While she has taken extra precautionary measures against dengue, Kat says she still allows Khloe to have the full benefit of being outside in the sun and the elements. “She’s outdoorsy,” Kat says of her daughter. “She loves the beach. She can stay in the beach for three days and she won’t get bored. She’s not much into toys and she can live without gadgets. I make her a nature-lover as much as possible.

The only difference now is that she always keeps a bottle of Green Cross Insect Repellent Lotion Gentle Protect handy. “You have to choose the best insect repellent for your kid, something that won’t harm their skin, and Green Cross can do that,” she advises fellow mothers. “Be knowledgeable and vigilant about dengue and use the best product for your family.”