Wang Chung and Naked Eyes will be having their first concert in the country entitled Back 2 Back
Throwback on December 5, 2013 (Thursday) 7pmat the Grand Ballroom of Solaire Resort and Casino
for the benefit of the recent super typhoon victims thru Oplan Damayan Yolanda and for the kids of
Gabay sa Landas Foundation. 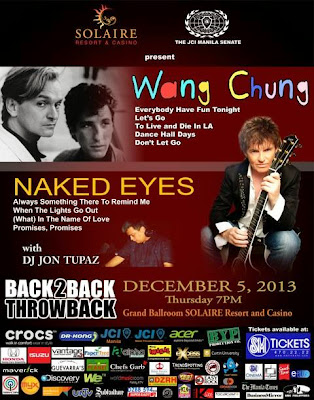 Naked Eyes a British New Wave band that rose to prominence in the early 1980s and originally formed
by two friends from Bath, England; Pete Bryne on vocals and Rob Fisher on keyboard. The duo is known
largely for its four Top 40 singles. The first, a cover of the Burt Bacharach/Hal David standard “(There’s)
Always Something There to Remind Me”(Bacharach himself has cited the cover as a personal favorite).
The band had subsequent hits with their own compositions, “Promises, Promises” (the 12” mix of
which features vocals from Madonna), “When the Lights Go Out” and “(What) In the Name of Love”
and a lot more.

Wang Chung is an English New Wave musical group formed in 1980. The name Wang Chung means
“yellow bell” in Mandarin, and is the first note in the Chinese classical music scale. The duo is
composed of Jack Hues(vocalist/guitarist) and Nick Feldman (bassist).The group found their greatest
success in the United States, with five Top 40 hits in the US, all charting between 1983 and 1987,
including “Dance Hall Days”(No. 16 In the summer of 1984), “Everybody Have Fun Tonight” (No. 2 in
1986),”Let’s Go!”(No.9 in 1987) and another hit that made waves here in our country, “Hypnotize Me”.

The crowd will also enjoy good music from the Master, DJ Jon Tupaz, who’ll resurrect 80’s retro hits and
get everyone on the dance floor as he brings back the good old days. Proceeds of the event will be given
to street kids from as well as to the victims of the super typhoon thru Oplan Damayan Yolanda. Gabay
sa Landas Foundation aims to help and rebuild the lives of abandoned and street kids by teaching them
the Christian core values. Oplan Damayan is JCI Senate Manila’s disaster and relief operations program
to help flood and storm victims.

As a new generation of much younger JCI Senators took the helm of the organization in the second decade of the millennium, the Manila Jaycee Senate leadership poised to rejuvenate a JCI Senate chapter which has seen better days. It changed its official name to JCI Senate Manila, in conformance to Junior Chamber International’s global branding standards. It actively led in the JCI Senate leg of the 60th JCI Asia-Pacific Conference held in Manila in 2011 and hosted two major fellowships that saw more than 200 JCI Senators and Members demonstrate a solid camaraderie under a common bond that transcends four generations of JCI members.

Indeed, for more than three decades, JCI Senate Manila has taken the lead beyond being a mere social club. It has transformed into a strong organization which has been adjudged the “Most Outstanding JCI Senate Chapter in the Philippines” and its succession of Senate Presidents, as the “Most Outstanding JCI Senate Chapter President in the Philippines.” Under the direction of a slew of competent leaders, JCI Senate Manila will continue to be remembered for its contribution of distinguished vanguards as they grace the pages of Philippine history and society.

For ticket inquiries call SM Tickets at 470-222 or visit www.smtickets.com.