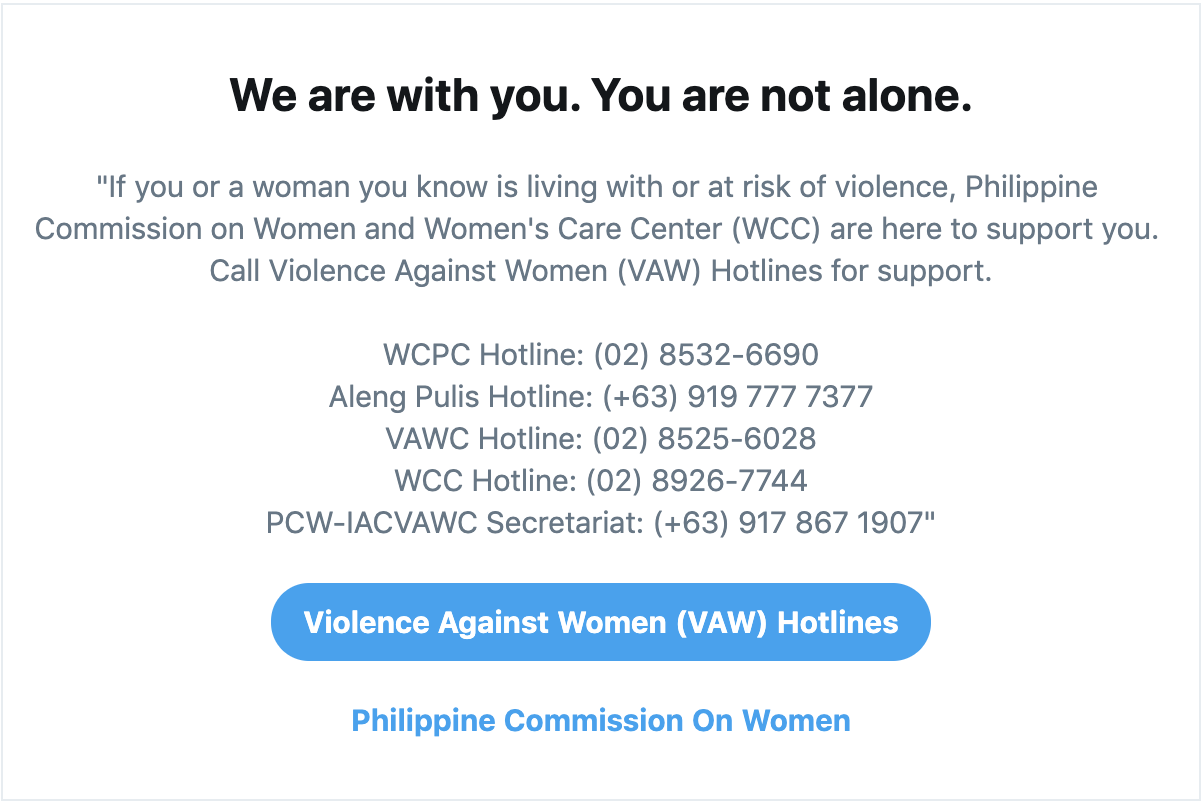 In response to a surge in gender-based violence globally as a result of lockdowns during the COVID-19 pandemic, Twitter today launched local language search prompts in seven Asia Pacific countries, including the Philippines. When people search on Twitter for Tagalog keywords associated with gender-based violence, they will see a notification in Tagalog directing them to the hotlines of local organizations where they can seek help, together with a list of NGOs that can provide support they need.

In close partnership with UN Women Asia Pacific who played an advisory role, as well as leading NGOs and government agencies that provide critical emergency care, support and counselling, this service is now available in seven APAC countries including Indonesia, Malaysia, Philippines, Thailand, Singapore, South Korea and Vietnam. We plan to expand this service in the near future to other countries across the region in the coming weeks and months.

As the UN Secretary General António Guterres has repeatedly called out recently, the global lockdowns announced during the COVID-19 pandemic have resulted in a “horrifying surge” in gender-based violence (GBV), which further deepens existing gender inequalities given the burden of caring for other vulnerable individuals at home — such as young children and/or sick or elderly family members — falls disproportionately on women.

#ShadowPandemic on the rise during COVID-19

According to the latest report by UN Women, 243 million women and girls aged 15-49 globally have been subjected to sexual and/or physical violence perpetrated by an intimate partner in the past 12 months. Emerging data shows that since the outbreak of COVID-19, violence against women and girls, and particularly gender-based violence, has intensified across the globe.

“Violence against women and girls across Asia Pacific is pervasive but at the same time widely under reported. Globally, one in three women experience violence at least once in their lifetime.  In fact, in many countries in our region, the number is even greater, with as many as 2 out of 3 women in some countries reporting experiences of violence,” says Melissa Alvarado, UN Women Asia Pacific Regional Manager on Ending Violence against Women (@unwomenasia). “Less than four in 10 women experiencing  such violence actually report these crimes or seek help of any sort. As lockdowns and stay-at-home orders are getting prolonged by countries around the world to contain the spread of COVID-19, women with violent partners increasingly find themselves isolated from the people and resources that can help them.”

“At UN Women, we hear that keeping services open has been hard in many countries. We are pleased to team up with Twitter to help connect women to local services currently available in their countries if they are experiencing violence or abuse.”

For example, national data from India indicates that gender-based violence has increased more than two-fold in at least 4 states in the north, while the reported cases from an NGO in Indonesia has recorded a tripling. The hotlines for women and children in Malaysia have also reported a 57% increase in calls while government orders aimed at controlling movement are in effect. Similar trends are seen in Singapore and South Korea as well.

United in the fight against gender-based violence

We recognize that collaboration — public, private and nonprofits — is a key to combating the complex issue of gender-based violence. We believe this partnership via the #ThereIsHelp notification service will contribute to the efforts of local organizations ensuring people can access and receive support when they need it the most.

In Philippines, Twitter has partnered with a trusted national NGO partner in this effort, as well as the key Government agencies providing services via the referrals of the #thereishelp service as follows:

“During this pandemic, we continue to promote the protection of women from violence. We are utilizing all the tools and platforms, including digital channels and social media platforms, to make sure all women know that we are here to help. Through this search prompt, we hope survivors, or their family and friends will be emboldened to speak up, seek safety, stand up against violence, and hold the perpetrators accountable,” says Atty. Kristine Yuzon-Chaves, Executive Director, Philippine Commission on Women

Twitter is pleased to take this unique step and launch the product feature dedicated to addressing gender-based violence. We are honored to collaborate with our critical partners across the region in this regard and are deeply grateful for their collaboration and support. We look forward to supporting their efforts to support and reach their communities during COVID-19 and beyond.