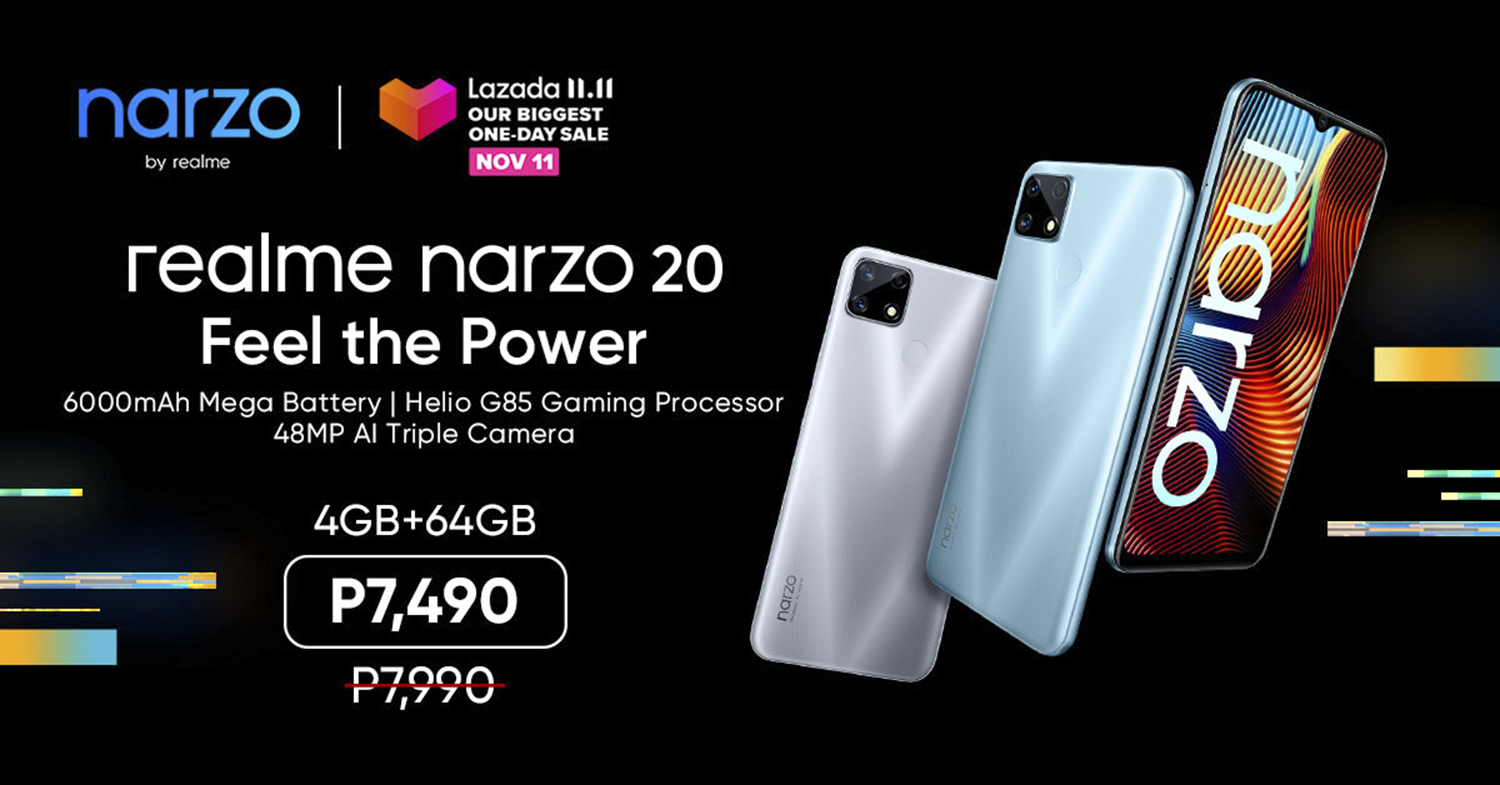 The country’s top 2 smartphone brand realme Philippines seals its position yet again in the local gaming market by launching a new device which is a perfect addition to the arsenal of young aspiring Filipino gamers — the realme narzo 20. Intended for aspiring gamers, the realme narzo 20 draws powerful performance from its gaming chipset MediaTek Helio G85 and supports prolonged hours of adventure through its 6,000mAh mega battery with 18W quick-charge technology. A recent study by Newzoo, the world’s most trusted source for games market insights and analytics, shows that the majority of gamers in the Philippines prefer mobile devices as platforms for their gaming spree. realme Philippines, in a bid to make more options available for Filipinos, officially brings to the country its narzo line-up with the introduction of the narzo 20. The narzo by realme line-up bridges the great divide between midrange and entry-level devices by bringing top-tier chipsets and other essential gaming features at affordable price points.

“We at realme have always been keen on empowering the youth to explore their many potentials. Mobile gaming in the country is indeed on the rise. This is why we hope we can inspire more young gamers to try their luck and skills in mobile gaming without them having to break the bank for high-tier devices. The realme narzo 20 is ready to be in the arsenal of every young Filipino gamer,” shares realme Philippines VP for Marketing Austine Huang.

Feel the power in performance

Gamers use powerful devices in slaying enemies to achieve victory in every battle. The realme narzo 20 is a gaming device that is equipped with the powerful MediaTek Helio G85 octa-core processor, which pumps its Arm Mali-G52 GPU up to a 2GHz peak, allowing great gaming for avid mobile gamers. Users need not worry about lagging as the device ensures smooth performance even in heavy-loading game engines like Mobile Legends and PUBG. As a processor for gaming, Helio G85 reaches 200,000+ in Antutu Benchmark.

Feel the power with a mega battery

The realme narzo 20 packs a hefty 6,000mAh mega battery, the biggest there is in the device’s price segment. This massive battery is essential for gamers who are in gaming marathons as it could easily last all day even with intensive gaming usage or when used for entertainment, online classes or work. Complementing this mega battery is an 18W quick-charge technology which allows the drained device to charge to 29 percent in just 30 minutes. realme Lab tests have shown that the realme narzo 20 could last for 45 days in standby mode which is far better than some flagships. With a special OTG reverse charge, narzo 20 can also serve as a battery life saver for other devices.

Feel the power of great snaps

The realme narzo 20 features a 48MP AI Triple Camera that lets users capture a perfect shot with stunning clarity and a wider perspective. Its other two rear cameras are an 8MP Ultra-wide Angle Lens and a Macro Lens. On the front, an 8MP selfie camera is available to take crystal clear selfies. The front camera also supports AI beautification function, HDR mode, portrait mode and a Panoselfie feature which lets users take wider selfies. This device is perfect for heavy smartphone users who rely on their mobile device for digital interactions like online schooling and content creation.

Feel the power of realme e-commerce

Understanding the market’s pivot to e-commerce, the narzo series by realme is aimed at strengthening the online presence of the brand, starting with the realme narzo 20’s exclusive availability on Lazada. The realme narzo 20 retails for only PHP 7,990.00 and will be primarily available on LazMall starting November 11. realme fans may also snag an additional PHP 500 discount on the newest realme smartphone at the Lazada 11.11 sale, lowering the device’s price to PHP 7,490. If a customer uses their Lazada Wallet upon checkout, a special Lazada 11.11 voucher can further bring the price down by PHP 400.

The realme Squad can expect discounts of up to 42 percent on realme devices at the 11.11 shopping festivals on Lazada and Shopee. The products to receive a price slash include the yet to be launched realme AIoT and smart lifestyle devices realme M1 Sonic Electric toothbrush, realme Smart Scale, realme Smart Cam 360⁰ and realme Adventurer Luggage. These new realme products will be launched on November 09 at 6:00 p.m via livestream on realme Philippines’ official Facebook page and YouTube channel.

realme Philippines will also be hosting the realme Mobile Legends Cup Season 3 finals on November 6, capping the seven-week event with a show game between CHoOx TV and Team Payaman’s Cong TV. The top Filipino YouTube vloggers and game streamers will be using the realme narzo 20 on the battlefield. Interested spectators may tune in on realme Facebook page at 11:00 a.m. for the live stream gaming event.

Counterpoint Research’s Q3 2020 report shows that realme has officially achieved 50 million smartphone sales around the globe, making it the fastest smartphone brand to hit the number. Imbibing the energy and vigor of the youth and young professionals, realme surpassed the expectations of analysts as it maintains its record of being the world’s fastest-growing smartphone brand in Q3 2020.

To celebrate these feats, realme Philippines is looking for its top fan in the country. If you think you are realme’s No. 1 Fan, then it is time to show your dedication and passion as a realme user! Get the chance to be recognized along with other top realme fans worldwide and win awesome realme products!