With a massive 7.8 billion Tweets globally in 2021, #KpopTwitter once again showed its power by breaking its previous record of 6.7 billion Tweets in 2020. Registering a notable 16% increase in Tweet volume globally, #KpopTwitter conversations became more diverse and vibrant in 2021.

2021 was an exciting year for the younger artists like ENHYPEN, Stray Kids, aespa, and ITZY; who have forged strong connections with their fans on Twitter. Moreover, conversations expanded with the growing popularity of Korean entertainment beyond music.

With its legion of passionate and active fans, Indonesia tops the list for most number of K-pop Tweets for the second consecutive year. Meanwhile, the Philippines, Korea, Thailand, the United States, Mexico, Malaysia, Brazil, India, and Japan made it into the top 10. 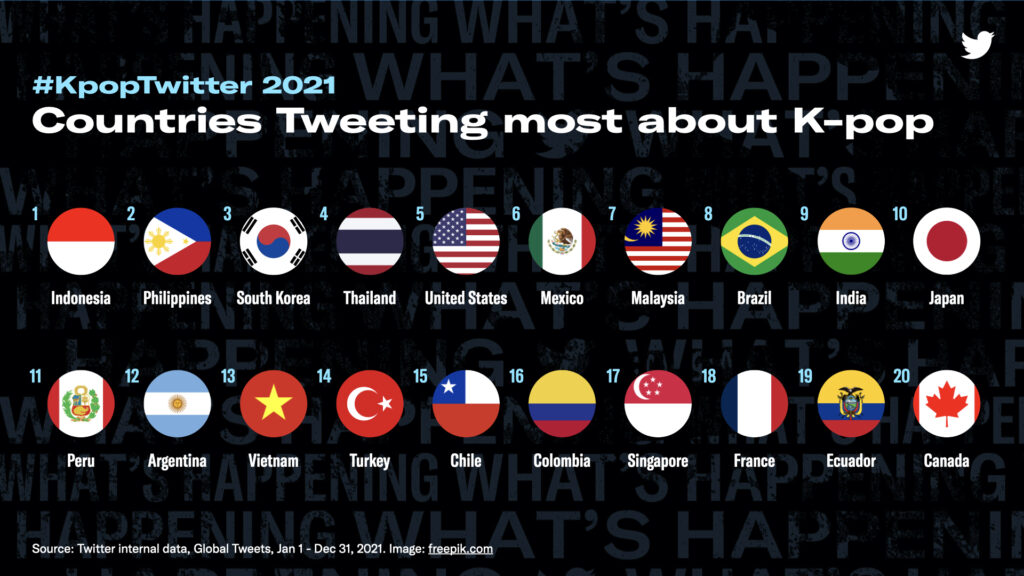 While the list of countries with the most number of fans (analyzed by unique authors) looks similar to the list for most number of Tweets, with Indonesia coming in first and the others like Japan and the Philippines close behind; countries like Peru, Colombia, Singapore, and Ecuador were featured among the top 20 this year. 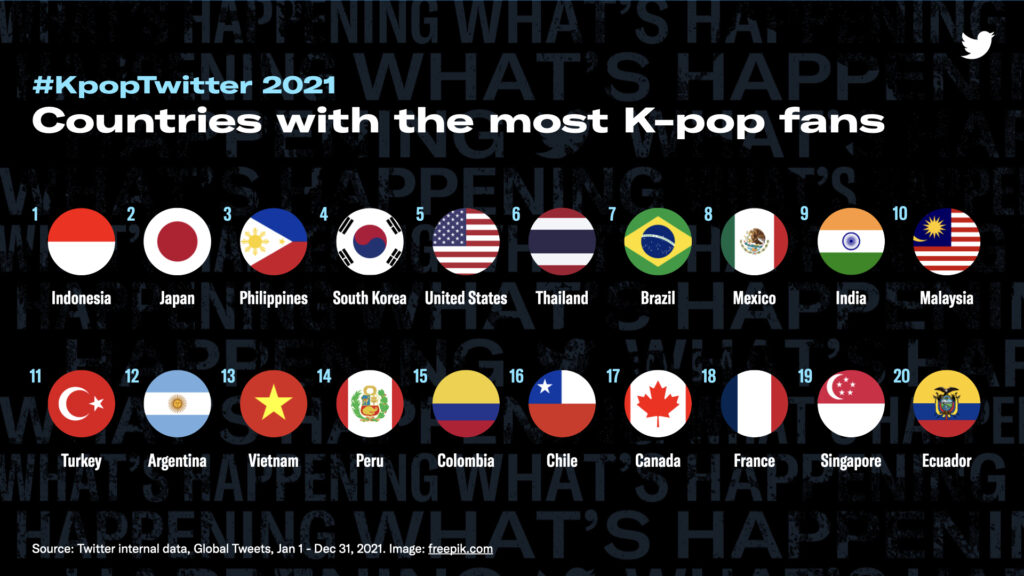 Of course, the 21st century pop icon, BTS (@BTS_twt), takes the top spot as the most Tweeted about K-pop artist globally – with the band’s on-site concert ‘BTS PERMISSION TO DANCE ON STAGE – LA’ alone contributing more than 68 million Tweets from all over the world. For the second year in a row, NCT (@NCTsmtown) comes in second. 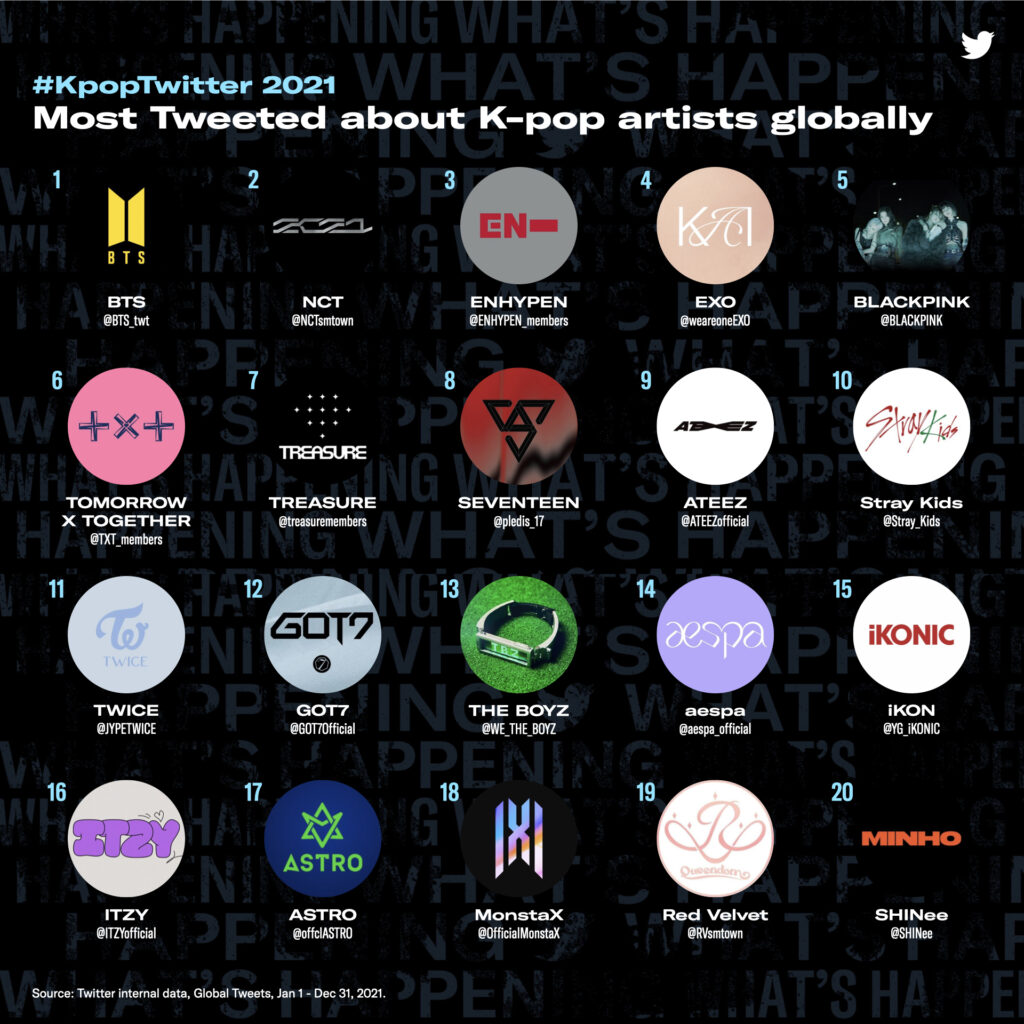 In addition to K-pop sensation BLACKPINK (@BLACKPINK) and heavyweights EXO (@weareoneEXO) being featured on the top 20 list, younger groups also cemented their positions with TOMORROW X TOGETHER (@TXT_members) rising from 8th place in 2020 to 6th in 2021, ATEEZ (@ATEEZofficial) climbing one spot to 9th, and Stray Kids (@Stray_Kids) at 10th. 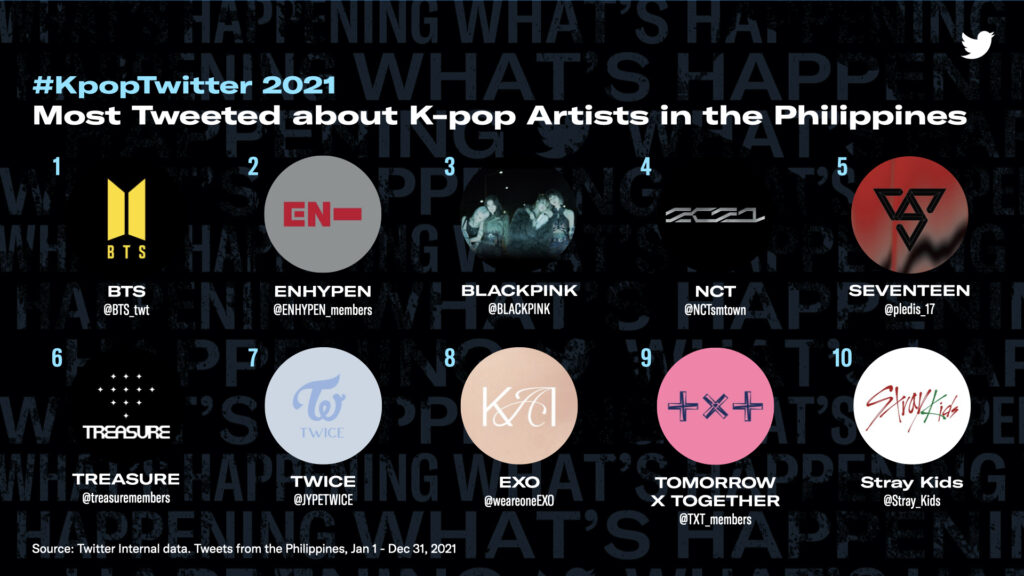 2021 also proved to be a breakthrough year for the 4th generation of K-pop idols. ENHYPEN (@ENHYPEN_members) who were 5th on the 2020 list of rising K-pop artists impressively came in as the 3rd most Tweeted about band in 2021 (just after BTS and NCT). Within a year of their debut, the group celebrated a huge achievement with their first studio album “DIMENSION:DILEMMA” becoming a ‘million-seller’ and placing 11th on the Billboard 200 chart. Fellow 4th generation idols aespa (@aespa_official) and ITZY (@ITZYofficial) also hit significant milestones as they first entered the top 20 list, at 14th and 16th respectively. 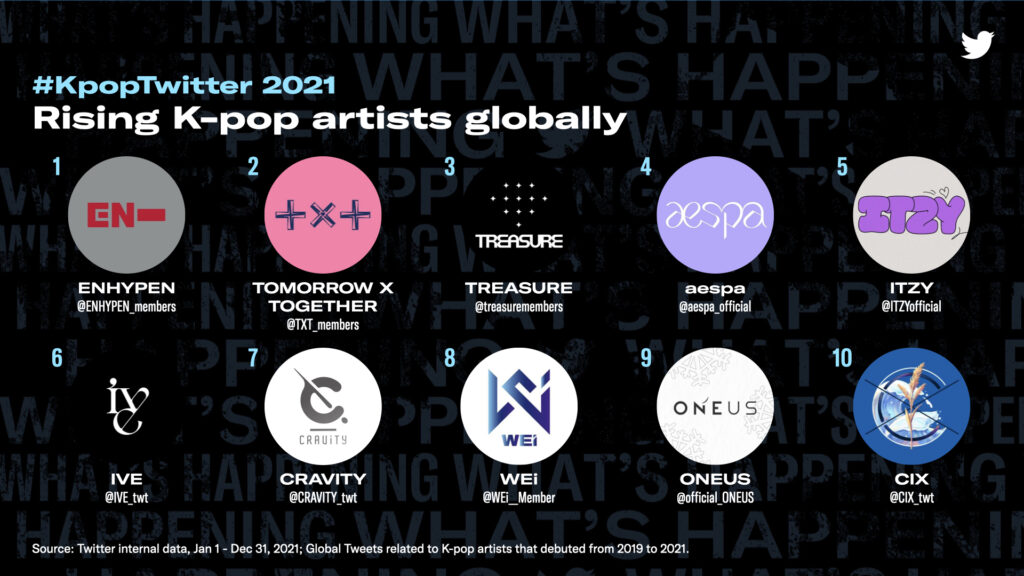 BTS (@BTS_twt) also shows dominance in the Philippines, ranking 1st as the most Tweeted about K-pop artist in the country, followed by junior label mates ENHYPEN (@ENHYPEN_members). BLACKPINK (@BLACKPINK) Rose and Lisa’s solo releases were the buzz among BLINKs, while NCT (@NCTsmtown)’s 2021 album, which introduced a new NCT U line up, hyped up NCTzens on Twitter in December.

While the reach of K-pop continued to skyrocket, we also saw a variety of conversations as Korean dramas, movies, webtoons, and other types of entertainment steadily cemented their place on the world stage. In particular, webtoons turned K-dramas were embraced by the global audience, with True Beauty, Sweet Home, and Navillera among the top most Tweeted about webtoons on Twitter. Of course, the influence of K-pop also had a part to play. When official soundtracks included famous K-pop artists, dramas and webtoons enjoyed a boost in viewership – such as BTS V’s song ‘Sweet Night’ for Itaewon Class.

As the place to be for both fans and artists to connect, Twitter is a home for many celebrities from the different facets of Korean entertainment. In addition to well-known rapper Youngji (@dokgodieinsaeng) and actress Lee SeYoung (@seyoung0703), stars from the hit show Street Woman Fighter such as Monika (@monikaaashin), Honey J (@__honey_j__), and no:ze (@noze_world) started new Twitter accounts in the second half of 2021. With so many different artists regularly sharing content and interacting with their fans on Twitter, the K-pop community has become more diverse and influential across K-culture.

Twitter continues to launch new features and programs that deliver #OnlyOnTwitter content to fans everywhere. Beyond providing support to the K-pop community, Twitter is also expanding our capabilities and evolving into a service to promote K-content. We have already hosted #TwitterBlueroom live sessions for movies and dramas including Q&As with the cast of The Book of Fish, King Maker, The Red Sleeve, and One Ordinary Day. Twitter also brought #FanTweets and #BehindTheTweets to K-pop starting with BLACKPINK’s ROSÉ’s. With the introduction of Twitter Spaces in 2021, Twitter has also created more opportunities and channels for fans and artists to connect and communicate, building stronger relationships with each other.

With up and coming idols connecting with their passionate fans on Twitter, we are confident that #KpopTwitter will continue to break new records every year. But beyond K-pop, we’ve also seen discussions about Korean content across the board on Twitter growing with K-pop fans talking about not just their favorite music, performances, concerts, and daily lives, but showing increasing interest in dramas and webtoons with K-pop OST (original soundtracks) or starring K-pop idols. As the global consumption of Korean content grows, we look forward to seeing even more diverse conversations on Twitter and providing more content you can see #OnlyOnTwitter in 2022.