Flagship photography at midrange price: realme 9 Pro Series launched in the PH with up to P2,500 off

realme, the PH’s no. 1 smartphone brand for 2021 (based on Canalys and IDC sell-in reports for Q1-Q4 2021), invites Filipinos to #CaptureTheLight like a Pro with its latest Number Series lineup that offers flagship-level features in the midrange segment. 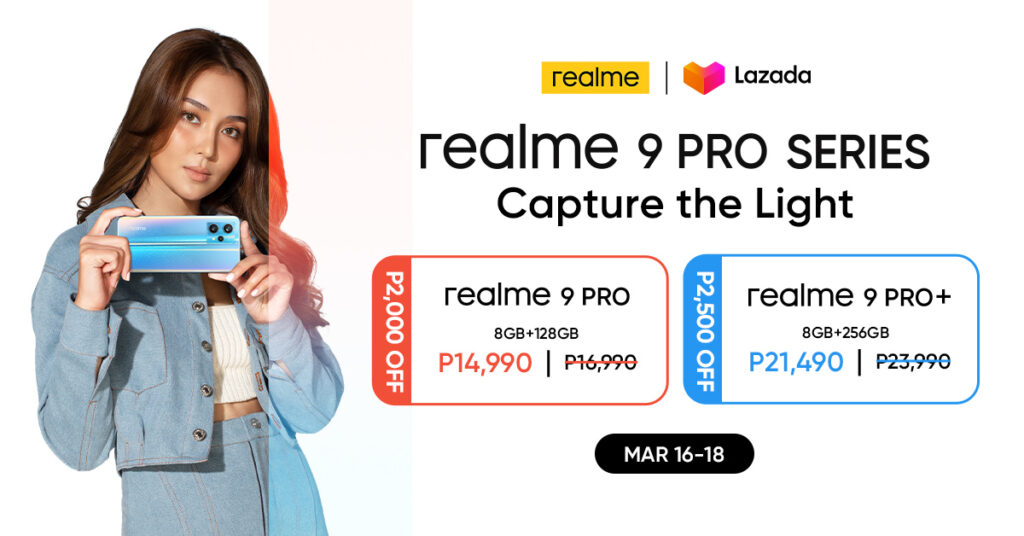 Launched via a special livestream event on March 15, the realme 9 Pro+ and the realme 9 Pro pack incredible features that are sure to cater to the needs of photographers and content creators. The realme 9 Pro+ is equipped with ProLight Imaging Technology that comprises a 50MP Sony IMX766 flagship sensor, Dual Stabilization System with OIS + EIS, and AI Noise Reduction Engine 3.0, designed to capture the best images even in low light. The realme 9 Pro, on the other hand, packs a 64MP Triple Camera Setup that has been fine-tuned to capture high-resolution snaps in various lighting conditions.

“We at realme believe that features such as Low Light Photography shouldn’t be exclusive to flagship smartphones. We always aim to make industry-leading technology more accessible to our market, and with the realme 9 Pro Series, we did just that by bringing an innovative combination of hardware and software into the midrange segment. With the realme 9 Pro Series, our users can capture every moment like a Pro, no matter where they are or what kind of content they need,” said Austine Huang, realme Philippines VP for Marketing. 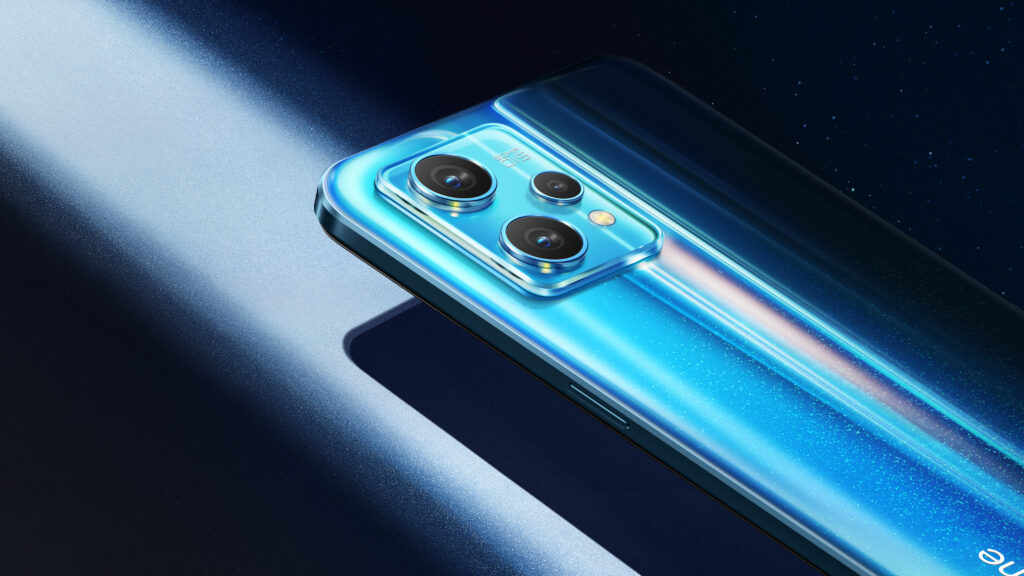 In addition, the realme 9 Pro+ is equipped with a Triple Camera setup consisting of the main 50MP lens, an 8MP 119-degree ultra-wide angle lens, and a 2MP 4cm macro lens to cater to any photography need. The realme 9 Pro also packs this setup for its rear but with a 64MP main shooter.

Both devices are also designed with Street Photography 2.0 which has a new Smart Long Exposure feature with various modes to help take long-exposure shots with ease. Other features such as a new 90’s Pop Filter and Peak and Zoom capability are also included.

The realme 9 Pro+ and the realme 9 Pro also boast other topnotch features in addition to their photography component. The former is equipped with the MediaTek Dimensity 920 5G Processor,  a 90Hz Super AMOLED Display, Vapor Chamber Cooling System, and a 4,500 mAh battery with 60W SuperDart Charge. The latter is equally capable with the Snapdragon 695 5G Processor, a 120Hz Ultra Smooth Display, Liquid Cooling System, and a 5,000 mAh battery with 33W Dart Charge, among others. Both devices are equipped with Dynamic RAM Expansion for up to 5GB virtual RAM, and run on the latest realme UI 3.0 based on Android 12.

Another notable innovation in the realme 9 Pro Series is the introduction of a Light Shift design for its Sunrise Blue variant, allowing the phone’s exterior to change hues from blue to red under direct sunlight. The realme 9 Pro+ and the realme 9 Pro are also available in a sleek Aurora Green colorway. 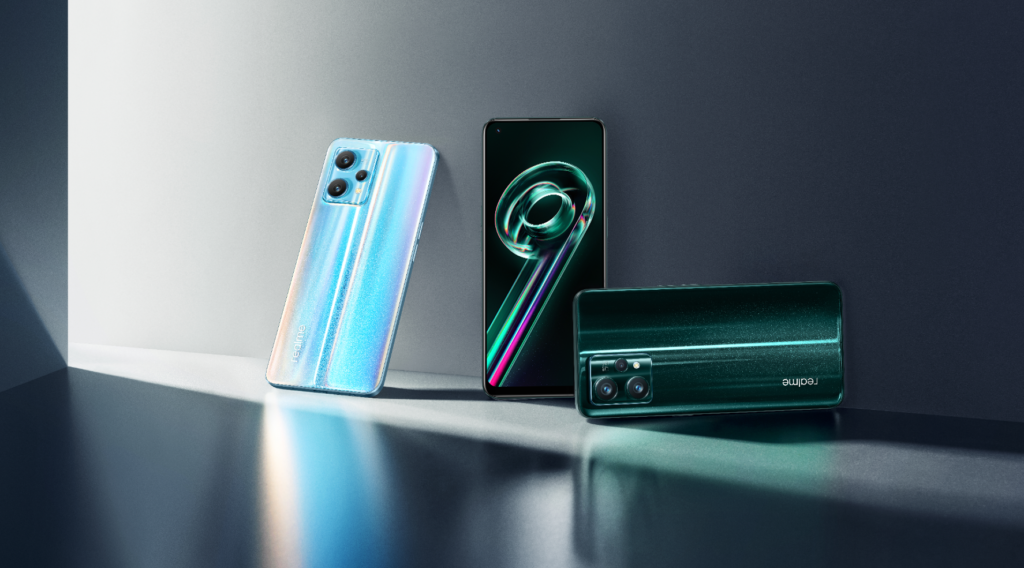 The realme 9 Pro Series will also be available at all realme official stores and partner dealers nationwide. The realme 9 Pro will be up for pre-order from March 16 to 25, with a FREE realme Pocket Bluetooth Speaker, realme Type-C Superdart Cable, and realme Mobile Game Finger Sleeves upon claiming on March 26 to 27.

Meanwhile the realme 9 Pro+ will already be available for purchase and will come with a FREE realme Cobble Bluetooth Speaker, realme Cooling Back Clip Neo and one year’s worth of extended warranty when you buy from March 16 to 20.

#NoiseOffRock on with the realme Buds Air 3 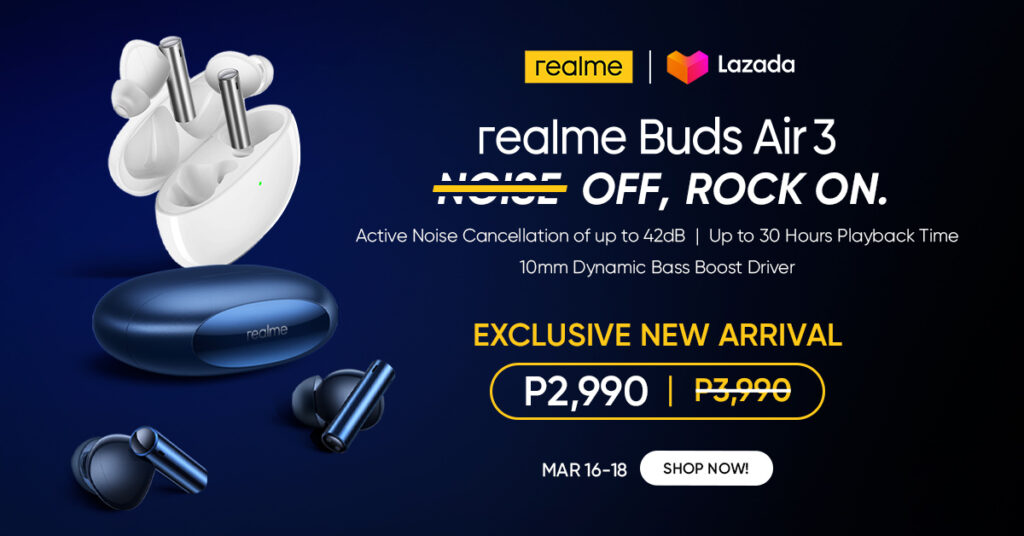 Designed to help consumers have a phenomenal listening experience be it for work or play, the realme Buds Air 3 is the first TWS earbuds with TÜV Rheinland’s high-performance certification with Active Noise Cancellation of up to 42db. It also comes with Smart De-Wind Technology, Dual Mic Noise Cancellation for Calls, a large 546mAh battery capable of providing up to 30 hours of playback time, and a 10mm Dynamic Bass Boost Driver for an incredible overall performance. All these features are packed in a stylish yet functional airy design in two stunning colors: blue and white.