Fierce Women Do Kung Fu | My Favorite Movie – So Close 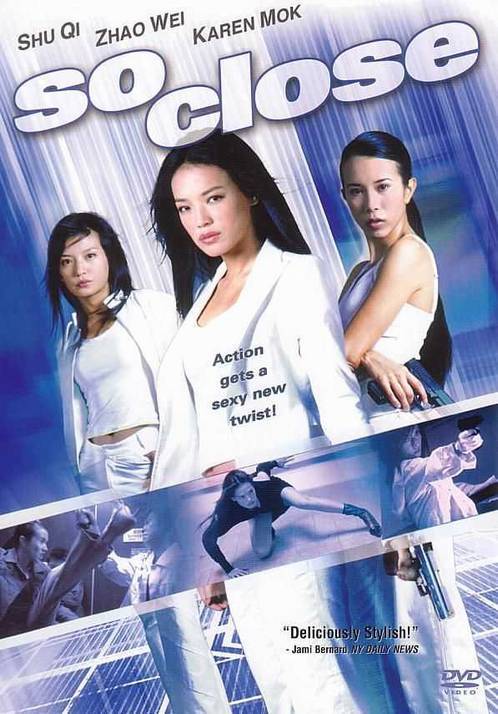 I’ve been watching a lot of movies since then. From romance to  comedy to action flicks, it makes my day complete whenever I’m having a great time munching popcorn and soda in my couch.

The first movie that I’d watched when I was seven years old is Shaolin Kids. My dad influenced me to watch a lot of kung fu inspired movies. From that moment, I preferred to watch Chinese films than other foreign movies.

Few years ago, while watching a movie in a cable channel, suddenly a movie trailer about “So Close” shown every now and then in that particular channel. I’ve waited to be premiered here in our country and I even recorded it when it was featured on AXN Asia few years back. Luckily, it has subtitle when I watched it ( I speak and understand a lil bit of Mandarin and Fookien).

Female action heroines have been a long-standing staple in terms of Chinese movies. While the concept may be new to Western audiences, courtesy of films such as “Crouching Tiger, Hidden Dragon, movie fanatics have been watching female protagonists kicking butt for at least for more than four decades. Today, female-driven exploitation action films are still popular in the former British Colony, such as Corey Yuen’s 2002 action flick “So Close”. The film has the goods when it comes to the principal reason why you would want to watch it in the first place– watching women kick ass. I mean…girl power!

Fueling comparisons to the sequels of “Charlie’s Angels”, three women are at the center of the movie “So Close”. Lynn (Shu Qi, “The Transporter”) and her sister Sue (Zhao Wei,”Shaolin Soccer”) are working as assassins for hire who make full use of their athleticism and IT skills to execute their contracts, with the former providing the firepower and the latter providing support in the background. After their most recent assignment, which involves killing the corrupt president of a computer company, a dedicated cop named Hong (singer/actress Karen Mok, “Shaolin Soccer”) ends up being hot on their trail.

However, as per how things usually unfold in the ‘hired killers’ genre, Lynn and Sue end up becoming the targets of the people who hired them in the first place. With the bad guys closing in, the sisters may have little choice but to team up with Hong, who would like nothing better than to put them behind bars. And if things weren’t hairy enough, Sue aspires to step out from under her elder sister’s shadow to do some running-and-gunning on her own, throwing caution to the wind in the process. Meanwhile Lynn faces a crisis of conscience when an old flame (played by Korean actor Song Seung-heon) shows up on her doorstep, forcing her to contemplate leaving life as a hired killer behind.

As they attempts to flesh out the characters and their respective back-stories are mediocre and seem more like filler than anything else.  However, the target audience of a film like “So Close” would be interested in the nuances of character development or the subtleties of storytelling. No, they are there to see the actresses kick, and kick high they do.

Blending with CGI and wire-fu (as they called it when doing the action sequence with wire on the back of their body),  “So Close” is peppered with action sequences that will please fans of kung-fu and action, with plenty of aerial moves, guns being flung through the air, and double-fisted shootouts. Some of the standout sequences include the high-octane opening action sequence in which Lynn takes out an office building full of disposable henchmen, a catfight between Lynn and Hong, a car chase that is monitored via satellite, and the expected final showdown against the chief bad guy and his army of gun-toting thugs and martial arts experts.

Aside from handling the physical demands of their roles, the actresses adequately service the thesping-optional requirements of the film. Shu Qi, whose career has been advanced more by her looks rather than acting ability, is competent as the devil-may-care Lynn. Zhao is easily the most interesting person on the screen, playing a naïve young woman who is eager to go out on her own and prove herself. And Mok is a lot of fun to watch as a tough cop with the brains and the brawn necessary to crack the case.

For a guilty-pleasure time-waster, it is difficult to go wrong with “So Close”. Though the script seems to sleepwalk through its storytelling obligations, this is more than made up for by the inventive action choreography of director Yuen. Infused with distinctive Hong Kong-style action sequences that you would be hard-pressed to find anywhere else, “So Close” comes very close in imitating “Charlie’s Angel”…Asian style.