Manila Ocean Park’s Back To The Wild Campaign 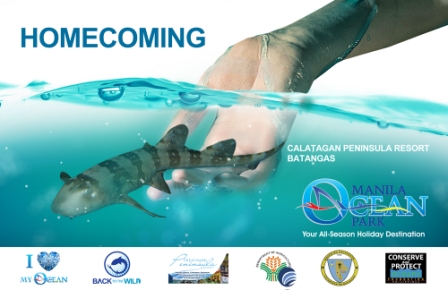 Manila Ocean Park through “I Love My Ocean” showcases marine biodiversity from within and around the waters of the Philippines, and it seeks to highlight the little-known fact that the Philippine archipelago is located in the global epicenter of marine biodiversity, the Coral Triangle. As such, it takes every occasion to disseminate powerful messages on protecting and conserving this rich marine heritage that our country has been blessed with.

Back to the Wild

This May 2012, MOP highlights its newest conservation program called “Back to the Wild”. Manila Ocean Park seeks to integrate sustainability factors in its initiatives, namely through its information, education and communications campaign, science research projects, resource management programs and day-to-day operations. These are meant to facilitate one of its objectives: to give back to the marine habitats where most of the oceanarium’s specimens originally come from. There will be a series of specimen release, starting with bamboo sharks. The program will release 20-30 juvenile sharks into select marine protected areas or MPAs, with the first release slated to occur on May 26, 2012. Some of the sharks will be released in shallow waters by snorkelers; the rest will be released in deeper waters by divers.

Manila Ocean Park hopes to focus on positive news regarding sharks. These species have been subject to various misconceptions, negative publicity and cruel acts. The sad fact is that humans are the biggest threat to their survival, largely due to shark finning and overfishing.

The whitespotted bamboo shark is a reef dwelling creature that lives near the bottom in shallow in-shore environments. It feeds during the night and rests in reef crevices during the day. Historically, bamboo sharks were known to occur in shallow coastal waters all throughout the Philippines, including Batangas. However, due to increasing fishing pressure to supply the pet trade as well as habitat degradation, sightings of these sharks have become a rare occurrence; in fact, most local SCUBA divers have yet to see a bamboo shark in the wild. As a result, many bamboo shark species have been classified as Near Threatened by the International Union for Conservation of Nature or IUCN.

To help alleviate this situation, Manila Ocean Park is aiming to conduct a series of bamboo shark releases in various coastal seagrass & reef habitats. It is currently the only oceanarium in the world that has perfected captive breeding of white-spotted & grey bamboo sharks (Chiloscyllium plagiosum & C. griseum) while simultaneously performing conservation enhancement of these species. Before the release, sharks will be tagged for tracking purposes.

For this very first bamboo shark release, MOP has chosen the municipality of Calatagan in the province of Batangas, approximately 110 kilometers south of Manila. The beach areas of Calatagan consist of coralline sand, mangrove areas, fish and prawn ponds. The town specifically in Barangay Bagong Silang is a marine protected area. The Calatagan Artificial Reef and Fish Sanctuary (formerly Bagong Silang Fish Sanctuary) was created to ensure protection of marine resources, increase fish catch and community involvement on conservation of marine ecosystem. Proximity to a nearby seagrass site as well as having an established Marine Protected Area were important considerations in choosing the release location.

Manila Ocean Park has chosen to partner with Conserve and Protect Oceans (CAP-Oceans), a non-stock, non-profit organization aimed at building a strong multi-sectoral advocacy for the conservation and protection of the sea and its rich natural resources. Its program is geared towars the services of encouraging community stakeholders in different environmental management activities and it is established by a group of divers.

Aside from CAP-Oceans, other organizations who are part of Back to the Wild program include Bureau of Fisheries and Aquatic Resources (BFAR), National Fisheries Research and Development Institute (NFRDI and the local government unit of Calatagan together with its youth leaders.

Manila Ocean Park is fully aware of its obligation to reach a broad public and impart necessary information relevant to current environmental issues. It is our aim that the “Back to the Wild” Release program will be a step in the right direction for marine education and conservation. We hope that more people will do their share in ensuring that future generations will be able to enjoy and see these fascinating animals in their natural habitat.