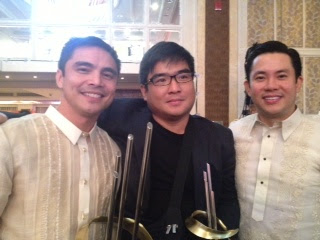 Bagging the Young Entrepreneur of the Year Award designed by the world renowned sculptor, painter and graphic designer Michael Cacnio, Marvin Agustin did not expect to have brought home one of the five awards, Young Entrepreneur from the prestigious Ernst and Young Judges chaired by Cesar E.A.Virata along with Br. Narciso Syloria Erquiza, FSC, Engr. Merly M. Cruz Undersecretary of the Department of Trade and Industry-Regional Operations and Development Group (DTI-RODG), Vivian H. Gee, Head of Asia t the Schwab Foundation for Social Entrepreneurship as well as Associate Editor at the World Economic Forum, Dr. Milwida M. Guevara President of Synergiea Foundation, Rafael Cojuangco Lopa Executive Director of the Philippine Business for Social Progress (PBSP) and Hans B. Sicat President and CEO of The Philippine Stock Exchange.

Marvin has a lot of stories to tell and inspire the youth to success. Dreaming to be a restaurant manager when he was young, he pursued the passion in the restaurant business after studying at the International School for Culinary Arts and Hotel Management under the tutelage of Chef Norbert Gandler. He gained more skills and knowledge in culinary arts after graduating Managing Arts Program at the Asian Institute of Management which eventually led him to venture with his friends Raymond Magdaluyo and Ricky Laudico opening SumoSam Foods Inc., in 2004. SumoSam has exponentially grown with more established partner restos Mr. Kurosawa, John and Yoko, Johnny Chow, Robotosan and Marciano’s. Today, Marvin shares the inspiration tapping on his experience in media with Futuretainment Inc. and Media Nation Inc., with manager Annabelle Regalado-Borja, production companies that organizes and presents successful concerts by renowned international artists in Manila.

Adding to the array of accolades, Best Operations Award from Ayala Merchant Awards in 2009 and Most Promising Restaurant in 2008 for John and Yoko, and Mr. Kurosawa in Eastwood Libis named as one of Philippine Tatler’s best restaurants in 2009 is Ernst and Young’s 2012 Young Entrepreneur of the Year award of the President of SumoSam Foods Inc., Marvin Agustin omniscient of the Filipino entrepreneur and inspiring the youth to hope and achieve.