Aug 6, 2013
This September, Dulaang UP continues its tradition of bringing world classics to the Filipino audience through the first major Philippine production of John Webster’s The Duchess of Malfi. Dark and visceral, The Duchess of Malfi is widely held as the greatest of Webster’s works and the most gripping of the Jacobean tragedies. It has mesmerized and shocked audiences since it was first staged 400 years ago in 1613. 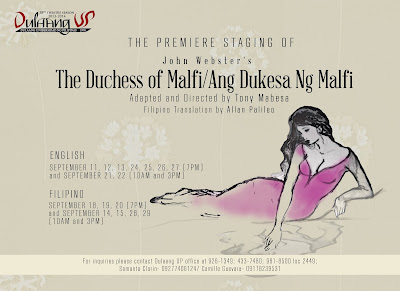 The Duchess of Malfi is renowned for producing what could probably be theatre’s most compelling female protagonist and two of its most twisted villains.

The play follows the story of a recently widowed duchess as she decides to go against her scheming brothers by secretly marrying her personal steward. The discovery of her deception engulfs everyone in a tumultuous and maddening whirlpool of envy, incest, greed, destruction, and death. The characters’ struggle for and against their desires forces us to ask ourselves, “How far will we go for pleasure?”

The Duchess of Malfi/Ang Dukesa ng Malfi runs September 11- 29, 2013 at the Wilfrido Ma. Guerrero Theater, Palma Hall, University of the Philippines Diliman. For sponsorship and ticket inquiries, please contact the Dulaang UP Office at 926-1349, 981-8500 local 2449 or 433-7840 and look for Ms. Camille Guevarra or Ms. Samanta Clarin.