Sep 6, 2013
Are you into bargain hunting? Want to know the best deals in Divisoria?
Today, a new app called Divisoria Guide App that will help bargain hunters who loves to shop in Divisoria. 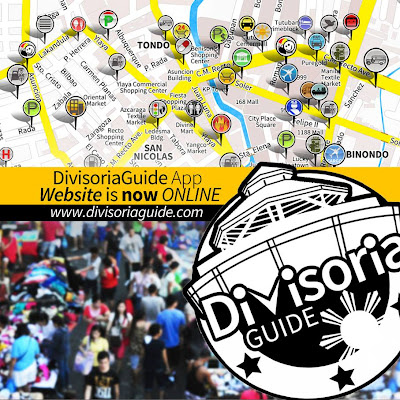 The said application for iOS was created by young Filipino entrepreneur John Christian Yayen who hailed from Palawan. It will be available for download starting today, September 6 exactly 5 pm.

Divisoria Guide App which will be sold at $2.99 or around P130 at the App Store. This particular app would be an essential for new and aspiring entrepreneurs, and bargain hunters as they explore the country’s biggest marketplace for bargains.

The main features of this app are:

Few years ago, I accompanied my sister to go shopping in Divi for her tiangge store. All we need is to stroll around the best shopping stores in Divisoria and got lost from the crowded Manila area several times.

According to Yayen, the reason why he decided to work on the App not only to help himself but also other small business owners and ordinary consumers who might be interested to shop at Divisoria but are hesitant to do so for they have no idea where to go, not to mention the fact they are very concerned with their safety.
“Divisoria Guide is the perfect app for everyone who would dare to visit that part of Manila especially nowadays that even search engine giant, Google has very limited information about it.”, he added.

Yayen said locals and even the Chinese businessmen who frequent the area are not even that familiar with the places that he just discovered while doing his research for this app. His almost one year of hard work made him realize that Divisoria has a lot of things to offer – from the basic commodities at very low prices that attract local and foreigners alike to as huge as the Filipino culture and history.

With this app, mobile app users can now access great information in just a click of a keypad. You don’t have to bring your map. With plenty of information on establishments, products, and other useful utilities, the app would help users in many ways, which include saving a lot of their time, money and effort.

Note: Here’s a YouTube ad for your perusal: https://www.youtube.com/watch?feature=player_embedded&v=nSmY90Dre8U