Few days ago, she bashed Young when she found out that Miss World is from the Philippines and degraded our race (Filipinos) by calling us underprivileged, filthy and uneducated maids. 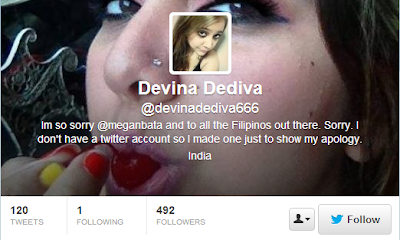 Earlier while reading Vince’s post on When in Manila regarding this matter, I personally browsed the alleged Twitter account of Dediva. Here’s what I read on her Twitter feed. Her first tweet posted last October 2.
[View the story “Alleged tweets of Devina Dediva” on Storify]
Meanwhile after she was fired from the school she was working as an assistant teacher in Singapore, Anthony Benedicto, a Singapore-based Filipino working in the said country filed charges against her under the Sedition Act. She might be put in jail for a maximum of three years with a fine up to 5,000 Singaporean Dollar.
As you may all know, Singapore is known for strict government rules. And they prohibiting its citizens from mocking another race through acts words and publications, which includes posts and comments on social networking sites such as Facebook, Twitter and Instagram.

“Under the Sedition Act, anyone found guilty of promoting feelings of ill-will and hostility between different races or class of the population of Singapore can be fined up to $5,000 or jailed up to three years, or both.”

According to Benedicto, “The police is still investigating on this matter and are verifying her acts. I believe she might be charged under the Sedition Act. Again, that is pending investigations and confirmation from the Police,”.

What can you say about her tweets?