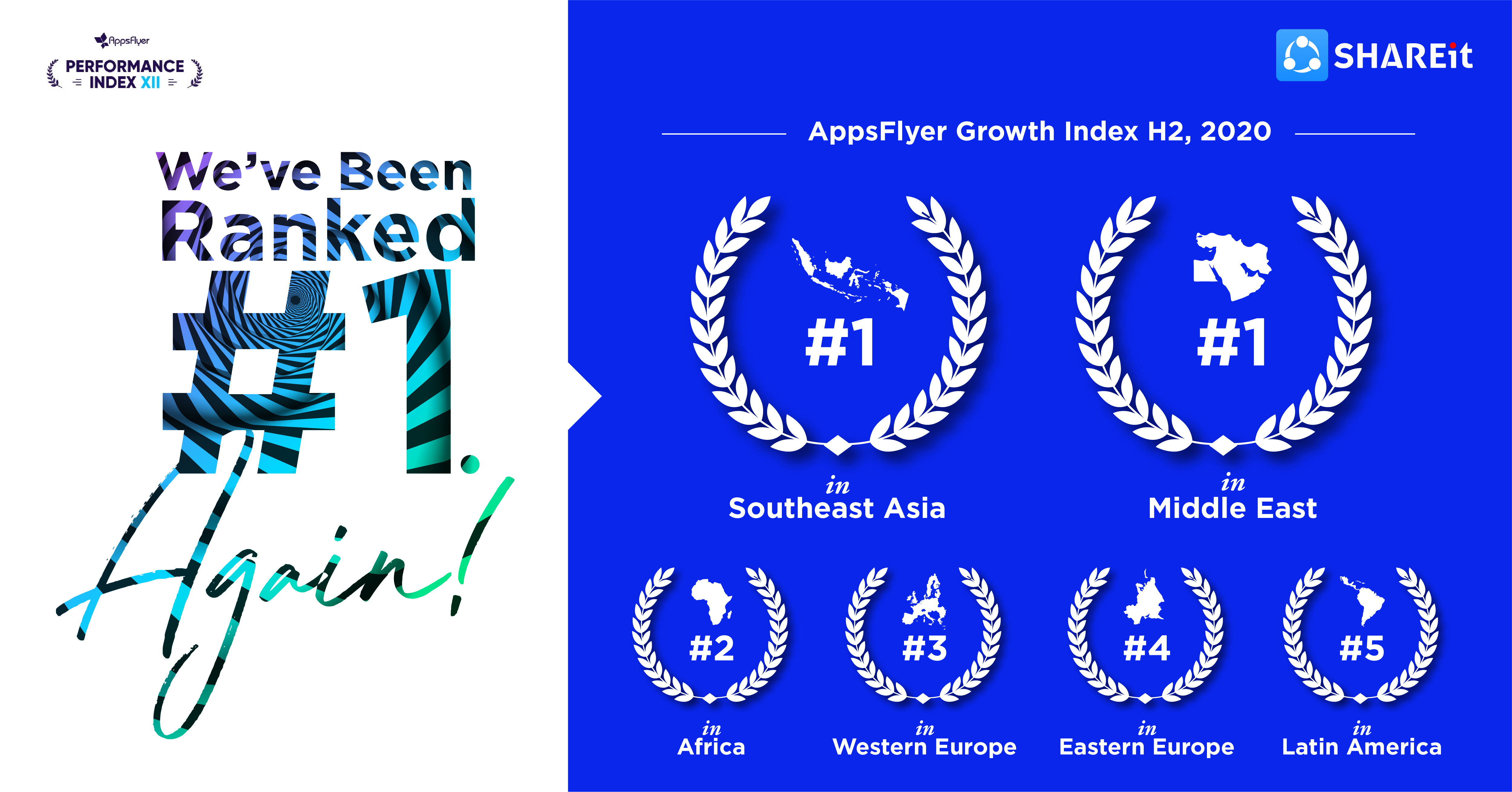 SHAREit, the world’s largest file sharing, gaming, and content streaming application, has been once again ranked as the No. 1 fastest-growing media publisher in Southeast Asia and the Middle East for H2 2020 in the AppsFlyer’s latest Performance Index. Appsflyer also ranked SHAREit as a top media publisher not only in emerging markets like Africa (ranked second), but in developed markets like Western Europe (ranked third), Eastern Europe (ranked fourth) and Latin America (ranked fifth) in its Growth Index. The Performance Index by AppsFlyer is a tool for app marketers to see the performance ranking of mobile media sources.

The achievement follows SHAREit’s remarkable performance in Edition XI (covering H1 2020) of the AppsFlyer Performance Index, according to which it ranked at the top in the Middle East and Southeast Asia with an impressive 160% growth rate in the app install pie in H1 2020. The rankings highlight SHAREit’s unique product offering and a wide array of features that not only make the application popular amongst customers, but also an indispensable resource for marketers.

Karam Malhotra, Partner and Global Vice-President at SHAREit, said: “The power of the user voice has never been as loud and clear as it is today, as they want choice, flexibility and anytime access to personalized digital content via their mobile phones. Our holistic platform offers a smart and unique blend of content discovery, consumption, gaming, and sharing in line with heightened customer expectations as we strive after refining the SHAREit experience to be useful, convenient and seamless. We’re thrilled to be named the fastest-growing media publisher in the Middle East and Southeast Asia– it’s another testament to SHAREit’s commitment to providing flexibility, autonomy and utility to our users while helping advertisers grow their business leveraging the SHAREit community.”

SHAREit’s primary feature is the peer to peer file transfer, allowing users to share pictures, music, and more, with other devices without using an active internet or Bluetooth connection. Being the first app channel partner of Google Play, it also ensures secure application transfers with Peer-to-Peer Offline App Sharing – letting users share apps via SHAREit, adding them to the user’s Play Library and managing app updates when the device comes back online.

SHAREit has also established itself as a one-stop content platform, providing users with a gaming, content discovery and consumption platform. SHAREit has a dedicated gaming center on the application, which offers HTML5 games, gaming videos and an option to download hot games. With games across all genres, it has one of the largest catalogues of mobile games from developers across the globe.

SHAREit’s remarkable growth has also emerged in the Philippines as the application has seen a significant 15% month on month increase in daily active users since the lockdown began in March 2020, having gained nearly 40 million monthly active users in the country. SHAREit was also recognized by AppAnnie’s The State of Mobile 2021 Report, ranking 6th in most used, and 8th in most downloaded applications in the Philippines, making it one of the most popular and fastest-growing apps in the country today.

With consistent advances in terms of content, SHAREit has successfully leveraged the popularity of local regional content to establish itself as the hub for short-format videos and has hence seen its user base spike worldwide with growing engagement levels. SHAREit now boasts a highly engaged user base of over 1.8 billion users globally speaking 45 languages in about 200 countries and regions. The application currently has more than 500 million monthly active users globally.

We’ve got something new