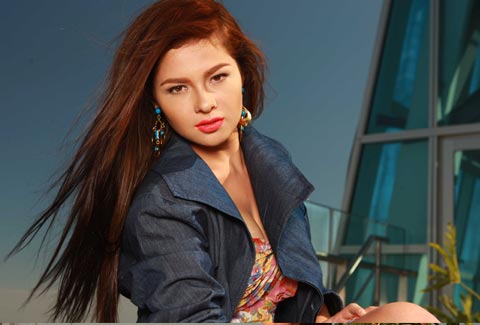 Young actress Andi Eigenmann deserves to be given a second chance in showbiz after giving birth last November. She flaunt her sexy figure,as she prepares for her showbiz comeback.

She already cut off several pounds, as she was seen attending the launch of Magnum Ice Cream last Wednesday.

“I’ve been just extra disciplined than I was before, getting back in shape because I’m really into going back to work really soon,” she said

“So basically I’ve just been preparing. I’ve been doing this special diet, which you will know about very soon,” she added.

According to her, she had just met with executives at ABS-CBN on her upcoming projects, in which includes doing a cameo in a hit show and, more importantly, a TV series that will serve as her comeback vehicle.

“I’m just not sure if I can say anything yet because were still in the process of preparing for it,” she said when asked for more details.

“I’m very, very thankful,” she added. “That’s why I’m working harder to present myself in a way that people will be proud of me because I wanna prove to them that I deserve the second chance that they gave me.”

Her inspiration, her bundle of joy…her daughter Adrianna Gabrielle.

“I’m really happy with my daughter and I just want to focus on work and spending time with her. She’s the one that’s important to me right now,” she said.

“Before there would be times when I’d look down on how I’ve been, but now I’m just always happy,” she shared. “Whatever problem or obstacle that may come my way, for me it’s nothing, because I know I have (my daughter). I’m complete already.”