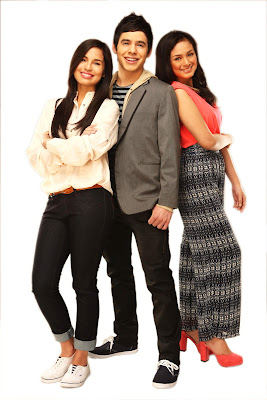 David Archuleta fans all over the world are abuzz this week more than ever as TV5’s primetime mini-series Nandito Ako nears its much-awaited grand finale this Friday, March 23. Top-billed by the American Idol sensation with TV5’s own homegrown stars, Jasmine Curtis Smith and Eula Caballero, Nandito Ako has become a milestone for the Kapatid Network as it was able to tap a new worldwide market with the groundbreaking show.
The popular international singer’s first Asian TV project has underscored his charisma here and abroad—marked by Nandito Ako’s unparalleled buzz online, particularly in micro-blogging site Twitter where it has been a consistent trending topic (both in Twitter Philippines and worldwide), making it one of the most talked about Philippine local programs to date.
Watch out for the remaining tear-jerking episodes of Nandito Ako that will sure to leave a mark on viewers’ hearts. After finding out that Holly (played by Eula Caballero) has brain cancer, Anya (Jasmine Curtis-Smith’s character) decided to le t go of her love for Josh (played by David Archuleta), knowing that it’s the only way for the terminally-ill Holly to be happy. Anya’s decision to leave has paved the way for Josh to get closer to her best friend. But will Josh ever realize that Anya is the young girl who saved him from the fire and owns the missing piece of his watch?
Meanwhile, as Josh’s benefit concert approaches, news breaks out that he’s set to reveal the real identity of his girlfriend. Will Josh root for his real love Anya or choose to make Holly’s remaining days nothing but full of memorable and happy thoughts?
Don’t miss the remaining episodes this week of the Mac Alejandre-helmed mini-serye which also stars Gelli de Belen, Aiko Melendez and G. Tongi, with Alwyn Uytingco, Ana Capri, Mon Confiado, Ana Feleo, Joseph Bitangcol, RS Francisco, David Bianco, Byron Ortile, and Ms. Perla Bautista, airing after Wil Time Bigtime on TV5.
by Eccentric Yet Happy