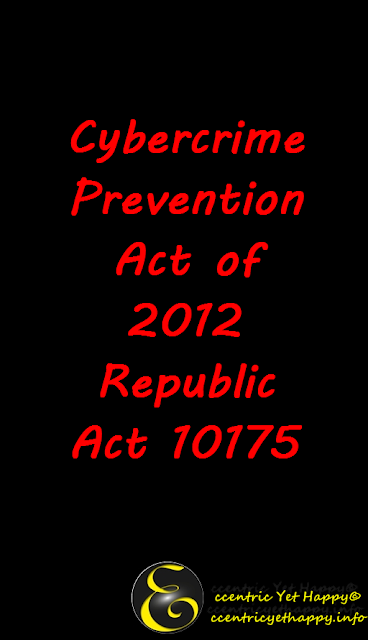 And for the past few days, I watched several interviews, read articles and blog posts regarding this law. I was frightened on the penalities, most especially on the libel clause that was inserted by Senator Tito Sotto. The law signed by President Noynoy Aquino last September 12, 2012, which voted by the following lawmakers:
Only Senator TG Guingona didn’t signed the said law.
But after implementing the Cybercrime Prevention Act last October 3, a lot of lawmakers who are now against the said law.  They are:
11 petitioners already filed against the Cybercrime Law to the Supreme Court, as of October 5.

FACTS ABOUT THIS LAW:
After the controversial “I Love You” virus in 2000 that a certain Onel de Guzman who is believed to be the person behind it. The famous computer virus damaged worth $2-5 billion. And during that time,  E-commerce law (Republic Act 8792) passed as a law in June 2000.

Eleven years has past, then Senator Edgardo Angara and Congressman Sigfrido Tinga co-chaired the Bicam Conference Committee on the Cybercrime Law.

Former President, Congresswoman Gloria Macapagal-Arroyo, is one of the bill’s co-sponsors.

Here is the full details of the Republic Act No. 10175 or the Cybercrime Prevention Act of 2012


Here are the punishable sanctions under the controversial Cybercrime Prevention Act are:

A lot of people still didn’t know what are the penalties for this particular law. Here are the following:

How it will be done by the law enforcement authorities:

The National Bureau of Investigation (NBI) and the Philippine National Police (PNP) shall be responsible for the implementation of the said law.

The Department of Justice (DOJ) will be responsible in doing the investigations regarding criminal offenses related to computer systems, collecting of electronic evidences, and making it sure that the provisions of the law are complied with. And also they were the one who empowered by the law to block access to computer data if they are seen as prima facie evidence that violates this law.

My stand on this particular issue:

I’m not against the said law, but I’m disappointed on what Senator Tito Sotto included the libel clause. It’s
against the freedom of speech, which included on the 1987 Constitution. According to the law, in Section 4 of the said constitution:

Section 4. No law shall be passed abridging the freedom of speech, of expression, or of the press, or the right of the people peaceably to assemble and petition the government for redress of grievances.

I’m hoping that they will repeal the said provision.