Dec 25, 2012
GMA Films’ official entry to the 2012 Metro Manila Film Festival, “Sosy Problems,” opened in nationwide theatres today (December 25) along with the rest of the entries in the annual festival. 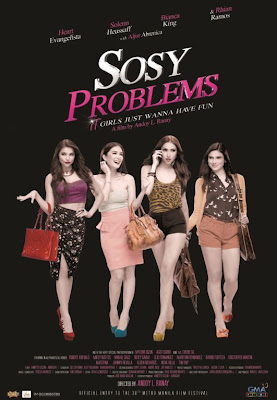 Directed by Andoy Ranay, the comedy film stars Heart Evangelista, Solenn Heussaff, Bianca King and Rhian Ramos with Aljur Abrenica.
Also starring in the movie are Mikael Daez as Santi, Alden Richards as Iñigo, classy character actress Cherie Gil as Martina, Mylene Dizon as Bernice, Mikey Bustos as Denmark, Tim Yap as Jamie Yap, Agot Isidro as Glory, Maritoni Fernandez as Dada,Johnny Revilla as Gabriel, Ricky Davao as Sebastian, Nova Villa as Lola Patria,Barbie Forteza as Becca, Kristoffer Martin as Israel with the special participation of Ruffa Gutierrez as Luca.
“Sosy Problems” is about four rich and famous ladies and their seemingly trivial, but nevertheless, hilarious problems.  Their main problem, however, is that their favorite hangout place, The Polo Club, which reminds them of all the memories of their “firsts” in life – including their first kisses and love affairs – is in danger of being torn down and replaced with a mall that is not so much for the rich and famous: in other words, not a “sosy” mall.
The “sosy” ladies will do everything they can in order to stop the Polo Club owners from pursuing their plans, and they will risk everything — even their poise and glamour – to achieve their goal.  In the end, out of desperation, they make a fool out of themselves — and that’s the joke.
If you’re looking for a light comedy film that will surely put a smile on your face, check out “Sosy Problems” in theatres near you.
For more updates and info about the film, follow its official accounts on Facebook (http://www.facebook.com/sosyproblems) and on Twitter (http://www.twitter.com/sosyproblems).
by Eccentric Yet Happy