Villar bats for creation of Department of OFW

Feb 27, 2013
HAVING been exposed to all the troubles and maltreatment encountered by Overseas Filipino Workers (OFW) in their quest for greener pasture, former Las Pinas Rep. Cynthia Villar vowed to push for the creation of a separate department for Filipino migrant workers if elected senator. 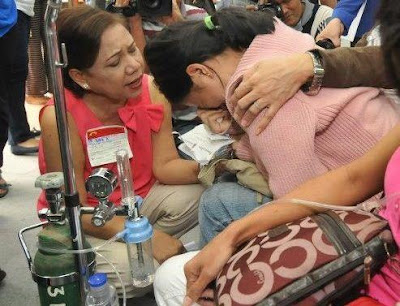 Misis Villar, being a three-time congresswoman and managing director of the Villar Foundation for the past 20 years has learned about the various ‘harrowing ordeal’ suffered by our distraught workers
“I even had the chance to personally talk to them during their arrival in the country since their repatriation is among our tasks of our Sagip OFW program under the Villar Foundation,” noted Villar, popularly known as “Misis Hanep Buhay.”
The President of the the Lady Legislators in the House of Representatives in the 12th, 13th and 14th Congress said the Department of Overseas Filipino Workers (DOFW) which she intends to propose in the Senate, will centralize all the services and functions of concerned government agencies or bureaus for OFWs.
She said the creation of a department dedicated solely to OFWs would simplify and harmonize efforts to look after them when there is a crisis and secure their welfare and rights during normal times.
“This would also put an end to finger-pointing among government agencies involved in the evacuation and repatriation of our distressed OFWs especially those who ran away from their abusive employers, and those in conflict areas,” said Misis Villar who is running for senator under the ticket of Team PNoy.
“We should promptly ensure that our OFWs are always protected since we consider them ‘modern day heroes.’ We draw a lifeline from their remittances being sent to the country. The dollar remittances provide a big boost to the country’s economy,” stressed Villar.
She related that her husband, Sen. Manny Villar, who served as House Speaker and Senate President had already filed a similar bill in the Senate, but it was not acted upon.
The senator had called for the establishment of a Cabinet-level agency exclusively for OFWs and their families at the height of the growing crisis in Syria. He said this would adequately and promptly address the needs of OFWs around the world.
Latest statistics from the Philippine Overseas Employment Association show we have over 2.2 billion OFWs in different parts of the world.
by Eccentric Yet Happy