Villar bats for amendments to the Family Code

FORMER Las Pinas Rep. Cynthia Villar, popularly known “Misis Hanep Buhay,” vowed to push for a legislative measure to make amendments to our Family Code if  she wins a senate seat in the coming May elections. 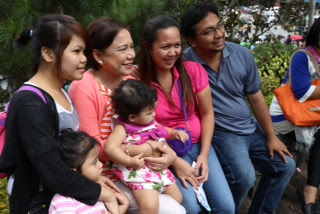 “I am  not in favor of passing a divorce law. What I want is to propose changes to our Family Code to make it more adaptable to the problems of ordinary Filipino families,” said Villar who was a member of the House of Representatives for three terms or nine consecutive years.

Villar said she is running again, this time for senator, because she believes in the reform agenda of President Noynoy Aquino. She also wants to continue her advocacies, among them, the protection of women, children and the family, as the strongest institution of the country.

During her stint in the House as President of Lady Legislators , Villar had always worked for legislations upholding their rights and welfare. If she becomes senator, one particular focus of her amendments concern the case of unjust abandonment by a husband of his wife and his children or analogous cases.

Villar stressed simple mechanisms should be adopted to obligate the husband to  continue  support to his family. She said there should no longer be a need for a wife to file an action in court which entails a long and expensive litigation process just to get support for the family.

“This would definitely be an added burden to the woman who was abandoned by her husband. Imagine the anguish, mental and emotional, and the physical stress  that a wife  has to go through — going to court while attending to the needs of their children, ” added Villar who was included by the University of the Philippines Los Baños it its “Exclusive List of Distinguished Women.”

Misis Villar  received from UPLB the unique hibis flower (gumamela) that bears her name in 2011, the ‘Hibiscus rosa-sinensis Cynthia A. Villar.’

The ‘Hibiscus rosa-sinensis Cynthia A. Villar’ has dark orange petals. The flower with a red eye and pinkish halo is the latest hibiscus hybrid to become part of the “Women in Public Service Series.”

Villar was recognized for her invaluable contributions to her home city and country as a legislator and leader, a successful entrepreneur, environmental advocate and exemplary public citizen.
Villar, who described herself as “the loving wife” of Senator Manny Villar, was a former House Speaker and Senate President, have been blessed with three children: Mark, Las Piñas congressman; Paolo, a businessman and Camille, host of Wowowillie.

Villar is running for senator under the Nacionalista Party with the Team PNoy Coalition.