Sony Pictures Television (SPT) Networks has unveiled a custom second screen viewing app to accompany the premiere of their hotly anticipated drama, Hannibal, which it co-commissioned for its global portfolio of channels. Developed by SPT Networks’ digital arm, the Hannibal app will initially be made available in local languages to accompany the series on AXN channels serving Spanish-speaking Latin America, Brazil, pan Asia, Spain and Portugal. It will be the first scripted second screen app in several territories. In Asia, Hannibal will premiere on Monday, 8 April at 10pm in the Philippines and on Tuesday, 9 April, across East Asia at 10pm (SG, MY, HK)/ 9pm (JKT). 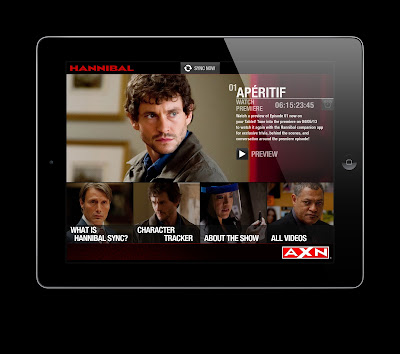 SPT’s second screen Hannibal app will synchronise to each episode as it airs live, and also use audio watermarking technology that will trigger it to synchronise during any DVR and VOD playback. The app will be available through iTunes for all iOS mobile phones and tablets to accompany international premieres on AXN channels from April 2013.

Users will be able to access exclusive Hannibal content, learn more about characters, watch relationships unfold and access behind-the-scenes footage. Integrated social media elements will enable viewers to interact directly with the show and other fans in a hosted Hannibal community. 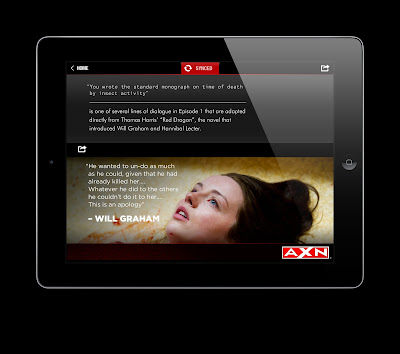 Eric Berger, executive vice president, digital networks at SPT, said: “SPT’s second screen Hannibal app will be a first for drama series in many markets, breaking new ground for pay TV. Hannibal is bursting with additional material and storylines that enrich the viewer experience through this app and which, thanks to the technology now available, we can synchronise live to any schedule, anytime.”

“Hannibal is tailor-made for this kind of real-time digital experience, said Marie Jacobson, executive vice president programming and production, networks for SPT. “We feel strongly the deep mythology and intricate character weaves of our series will drive core fans of the genre to seek out our app and engage at new levels.”

Hannibal is a new 13 part series based on the world-renowned mythology and infamous character portrait of Dr Hannibal Lecter from the Thomas Harris horror novels. The chilling series takes viewers back to the beginning and introduces two of fiction’s most enigmatic characters for the first time. The programme stars Hugh Dancy (The Big C, Confessions of a Shopaholic, King Arthur) as Will Graham, Mads Mikkelsen (Casino Royale, Clash of the Titans) as Hannibal Lecter and Laurence Fishburne (CSI, The Matrix) as Jack Crawford. The show is executive produced by Bryan Fuller (Heroes, Pushing Daisies, Dead Like Me) and directed by David Slade (Twilight Eclipse, 30 Days of Night, Awake pilot). David Slade and Martha de Laurentiis also executive produce.

Produced by Gaumont International Television in association with SPT Networks (through AXN Original Productions), Hannibal will premiere in April on SPT’s networks in 63 countries and in 18 languages around the globe. The series was also commissioned by NBC for the US market.