Catch AXN’s The Apprentice Asia on May 22

May 20, 2013
After the successful four seasons of The Amazing Race Asia, AXN returns yet again with another made-in-Asia-for-Asia Original Production – The Apprentice Asia! 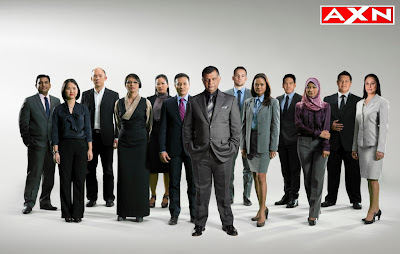 Filmed in Singapore and Kuala Lumpur, the Asian adaptation of the US reality series is based on the format created by reality TV guru Mark Burnett (The Voice, Survivor) and produced locally by Fremantlemedia Asia, a leading global entertainment company. The face of the show is aviation tycoon and Forbes Asia’s 2010 ‘Asia Businessman of the Year’, Tony Fernandes, most well-known for turning around Air Asia and breaking even within a year of taking over. Twelve candidates from around Asia will vie for the honor of becoming Asia’s very first Apprentice, with the winner walking away with the opportunity to work for Tony in one of his enterprises.

Meanwhile, Expedia Asia’s Kathleen was instrumental in driving the commercial success of AirAsia, championing its launch in China. She was also crowned the ‘Marketer of the Year’ at the Web In Travel Annual Conference 2012.

AXN has searched the region for the best business entrepreneurs keen to work for Mr. Fernandes. Representing seven countries in the region (Singapore, Malaysia, China, India, Indonesia, Thailand and the Philippines), the top 12 come from an interesting myriad of backgrounds in entertainment, food & beverage, hospitality, information technology and the legal and finance world. From ages 25 to 38, some are in their first jobs, some already own a thriving business where they are based; some have the gift of the gab from their years in showbiz and some have been recognized for their work in marketing and entrepreneurship in their respective countries.

Throughout the season, the candidates will be tested on their skills in the areas of selling, negotiation, creativity, management, branding and leadership. At the start, the candidates are split into two teams based on gender. Watch out for the first episode which makes especially good TV – as the candidates are given the challenging task of selling fish! This was a remarkably humbling experience for these high fliers given that most of them have not stepped foot in a wet market. Tony’s advisors, Mark and Kathleen, are on the ground to observe each team complete their task, and their opinions will play a key part in who Tony decides to fire at the end of the day.

What makes the inaugural season of The Apprentice Asia so riveting is the drama that ensues from the onset. As can be expected when a group of extroverted, ambitious characters get together, strong wills clash, alliances are forged, and nerves are frayed during each boardroom session where one of them will go home, empty-handed. It’s the survival of the fittest, and self preservation rules the day.

Tune in to AXN on May 22 to find out who or what makes Tony declare ‘a bloody disaster’ and ‘a weapon of mass destruction’, and hedge your bets on the candidate who might just end up winning The Apprentice Asia!