For 25 years of helping Filipino families, Habitat for Humanity Philippines (HFHP) has built over 42,000 houses in over 180 communities across the country. 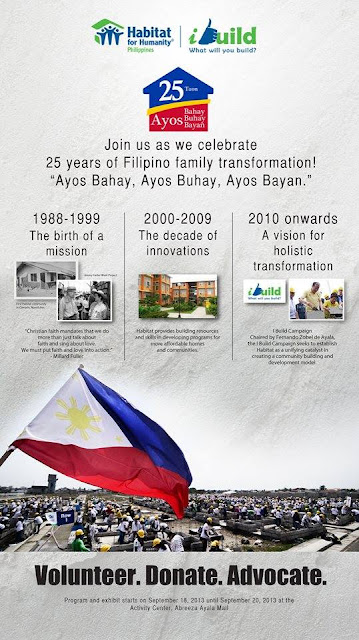 HFHP commemorates its 25th year anniversary with the theme of Ayos Bahay, Ayos Buhay, Ayos Bayan., which centers on the belief that social transformation begins with home ownership.

Last September 18, 2013, HFHP gathered government and business leaders, volunteer leaders, affiliate members, and other organizations in a celebration of the partnership that has brought HFHP to where it is today.

Honored during the night were key individuals who have been transformational in the success of HFHP in Mindanao, namely DSWD in ARMM for the Houses and Day Care Centers; Lutheran World Relief for supporting the Disaster Relief programs; Corporate Partners: NCCC Cares and ADTECH Events and Promotion Mangement Corp. And Rural Bank of Digos, Inc .

For its 25th year anniversary, HFHP embarked on a campaign entitled “I Build” with the goal of developing a holistic community development program that can be replicated nationwide. This year, HFHP announced an expansion of its campaign to “I Build My City, I Build My Philippines” which focuses on advocating for a city-wide shelter program for densely populated cities in the country.

Through “I Build My City, I Build My Philippines”, HFHP targets to reduce the housing backlog of the Philippines by 20% by the year 2020. With the country’s current housing backlog of 4 million households, HFHP has a goal of assisting 800,000 families through on-site or in-city resettlement of informal settler families in urban areas, employee housing for the private and public sector, self-help housing in rural communities, and disaster preparedness and response.

“We are very fortunate that with the help of our donors and volunteers, we have been able to reach thousands of Filipino families and build them new homes,” shared Charlie Ayco, HFHP CEO and Managing Director. “But there is more to be done.”

“For the succeeding years, HFHP will be working hand in hand with the national government, local governments, civil societies, businesses, and the youth sector to successfully develop and implement a city-wide shelter program in each city,” continued Ayco. “Hopefully, through this, with proper zoning, we will not only be able to build communities that are safe, resilient, and empowered, but also to reduce the number of affected populace during disasters.”

“We invite everyone to celebrate with us for the 25th year anniversary of Habitat and to continue with our journey in serving the Filipino families,” ended Ayco. “Let us continue to build our Philippines.”